Feeling anxious? It’s good to talk – or even shout and scream

For me, anxiety was an early warning signal that I was in danger of sliding into depression 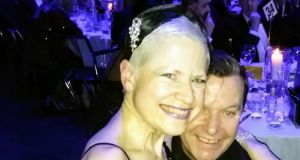 Aileen C O’Reilly with John Grehan: ‘Depression set in, totally uninvited, amid a promising career filled with concerts and parties’

It’s 8am and I’m at the front door of my apartment getting ready to put on the alarm before I leave for work.

My left hand hovers over the keypad as I try with my other hand to check that there aren’t knickers hanging off my bag. I check the seat of my jeans to ensure something unmentionable hasn’t become adhered to them whilst simultaneously running my tongue over my teeth to ensure nothing awful is stuck between them.

Sighing in frustration, I walk back into the bathroom and properly check all these things again... for the fourth time.

The rational side of me knows these anxieties are just that – anxieties – but the rational side of me is having less and less of a ruling vote these days, and the business of getting in to work is taking longer and longer as I am convinced everyone in their cars is laughing at me while I’m standing waiting for traffic lights to change, so I’m forced to stop off at four different places with toilets en route to recheck and recheck and recheck.

By the time I do eventually make it into the office I’m sweating profusely and anxious that I smell bad, and the paranoia of reeking has me rushing into the nearest chemist’s in search of industrial strength deodorant inside of 10 minutes.

This was my first acquaintance with the grey, miasmic fog of depression in 1996 when I was in my early 20s. It set in, totally uninvited, amid a promising career filled with concerts and parties and the joyous fulfilment that nothing else, bar writing, has ever brought me. I had money and lots of friends, work I loved and a hectic social life – and yet it was taking me an hour to get out the door of my apartment every morning.

I hadn’t a clue I was heading into depression – that was some nebulous condition I associated with people who were having a miserable time of it and had no reason therefore to just “cheer up”.

However, despite the huge focus currently spotlighting the need for each of us to be mindful of our own mental health, one blatant issue is being overlooked and that is the paranoia and skewed perception which often precedes any specific mental health issue.

The fact is, the onset of a mental health problem is generally an unsignposted segue as opposed to an overnight freefall and one which is gradual enough to disable your ability to do exactly that which all the well-intentioned posters and adverts are urging you to do.

The initial sign for me, as you can easily tell from the opening paragraph, was innocuous enough, especially as it didn’t happen when I was with other people, but it was an anxiety-triggered behaviour I now, with the benefit of hindsight, instantly recognise.

However, expecting most first-time sufferers to be able to step outside of themselves and diagnose that they indeed do have a problem is akin to expecting someone to self-diagnose schizophrenia.

Life under our current regime means that increased levels of anxiety over the threat to the health of our families and loved ones and ramped-up financial worries have become the new “norm”.

We feel ineffectual and unable to control what is happening; therefore, being conscious of, and bolstering, our own mental health is now more important than ever.

Since that episode in the ’90s I have been through depression several times, both heavily medicated and unmedicated (at my own insistence).

After years of being on the cure-all “liquid sunshine” of Prozac in my 20s and 30,s I chose the unmedicated treatment route the subsequent time, as the drugs sapped my creativity and I felt no need to write or do anything.

My tendency towards depression is, I now realise, one of the downsides of a creative temperament – one that needs constant stimulation and distraction.

For me, the black hounds of anxiety and paranoia can easily be triggered by a shortage of work (not good when you’re freelancing), which leads very quickly to the sense that I am losing control of my life. It also manifests itself in feelings of overwhelming rage – not really something one associates with depression.

Without the reassuring pressure of deadlines and the necessary fulfilment of publication to distract me, paranoia can grow like some damp-loving fungus in my psyche, leaving me convinced I am being “overlooked” or forgotten about by my editors and co-workers.

The fact that they have their own lives and problems ceases to register as paranoia heightens my increasingly egocentric mindset.

The sense of being alone when these feelings take hold is utterly overwhelming and can quickly slip into a skewed perception of reality whereby I see everyone else busily getting on with their own lives as I am increasingly, from my own viewpoint, left behind.

While depression is a recognised mental health condition, affecting one in 10 of us in Ireland (that’s 450,000 of us at any one time, according to Aware), the early signs of its onset can easily go unnoticed and therefore fail to be dealt with before they become a far more debilitating problem.

In fact, the symptoms which experts class as the early warning signs of depression can often go unnoticed in the midst of the routines which make up our daily lives.

Changes in sleeping pattern - lying awake for long periods during the night.

Ceasing to enjoy things in the same way you usually do.

Taking longer to recover your equilibrium after minor inconveniences.

Food no longer tasting good and ceasing to excite you.

Feeling an increased sense of anxiety.

Feeling sleepy or tired a lot of the time.

Turning down invites from friends and family and choosing to spend more time alone.

Finding it difficult to concentrate.

“Anxiety is something which needs to be discharged or it becomes depression,” Trinity College-based lecturer and psychotherapist Seán McCarthy explains simply. “Talking about what is worrying you is the first important step. It doesn’t have to be to a professional – talk to your friends. The important thing is to release the emotions and thoughts.

“Discussing your fears and anxieties and getting to the root of what is bothering you is so important,” he advises. “Failing to do this is what leads to the isolating downwards spiral into depression.

“The onset of paranoia quickly erodes your self-confidence and leaves you feeling wronged by those around you, which in turn leads to you worrying that you must have done something wrong so are therefore unworthy of their attention. This domino effect sees you retreating from people when you need them the most. Effectively, you are creating a chasm between yourself and others where you’re isolating yourself with all these unpaired, self-defeating thoughts in your head.

“By the time depression gets a grip we essentially forget that there is joy in life – not just in the here and now but that there ever can be again”.

If you’re starting to feel anxious just remember it’s good to talk, but it’s also important to shout, scream and howl out loud sometimes when – particularly at the moment – it can feel like daily life is getting just a bit too much like George Orwell’s 1984.

“Believing that the ideal human state is to sit on a cloud of enlightenment is nothing more than self-deluding spiritual bypassing” McCarthy concludes. “Remember, temper is energy not the enemy. Anger is so invigorating. We should be channelling it, not trying to erode it or have it removed out of some misplaced need to be calm all the time.”