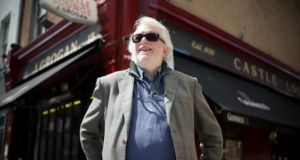 Tommy Smith, who has died aged 78, was, with his business partner Paddy Kennedy, the joint patron of Grogan’s Castle Lounge on South William Street in Dublin, famous as one of this country’s leading watering holes for artists, poets and writers and as a unique gallery.

What has made Grogan’s unique was, and is, the fact that the artists have never been charged for displaying their works, Smith and Kennedy taking no commission for any pieces sold, an absolute boon for younger artists especially.

Over the 48 years Smith was in business there, Grogan’s became also a haven for poets. His long-time friend, the poet Pat Boran, radio producer and presenter, said it was in this setting “that I first began to think of myself as a poet”, adding that the pub became a networking centre, long before the internet, in which like-minded folk could meet each other and make contacts.

“Grogan’s, under the guidance of Tommy Smith, has long been a vibrant arts centre and gallery disguised as a pub in the heart of Dublin city – a Plato’s Cave, the Sistine Chapel and the embassy of the republic of Cavan all rolled into one,” the latter a reference to Smith’s native county.

One of the most celebrated of Smith’s patrons was the poet Michael Hartnett, whom Smith admired greatly. Hartnett was one of a number of impecunious regulars whom Smith would, very discreetly, help out when they found themselves financially challenged. Boran describes how Smith “kept a watchful eye but a deaf ear”, where this was concerned “slipping hand-pullings to them at the right moment, which would return to him when their horse or their boat came in.”

Smith and Kennedy started business on South William Street in 1972. They were at the time relatively young in the business, but had a degree of luck involved in their joint venture, being able to buy Grogan’s from its retiring proprietor, Joe Grogan, at a time when South William Street was a somewhat desultory backwater, a centre for Dublin’s clothing and antiques trades.

In that year also, McDaid’s of Harry Street, long the hostelry of choice for Dublin’s literary and artistic elite, was sold, and Tommy Smith, keenly sensing an opportunity, offered its legendary barman, Paddy O’Brien, who knew everyone in that circle, a job at Grogan’s. O’Brien accepted, and, in the words of the artist Robert Ballagh, who gave the eulogy at Smith’s funeral in Dublin recently, this cultured clientele followed their favourite barman to South William Street “like a flock of seagulls following a trawler”.

Smith, ever an emollient host, faced the challenge of integrating the established clientele with the arty newcomers, and, remarks Pat Boran, faced it well. “The miracle of Grogan’s was that it managed not only to accommodate [that] set, but that it did so without cold-shouldering the many … others from the rag trade … for whom the pub was long since their local.”

Poet Paula Meehan recalled this week how Grogan’s became a hive where there was “a home from home for many of us, a post restante where letters, messages, books, manuscripts were sent and collected, a place to which to steer travellers met on the road who were heading for Dublin, a way to keep in touch with old pals, an employment exchange in the gig economy and occasionally a welfare bureau for the troubled.”

Smith, she recalls, “had a mercurial and eclectic mind: history, visual art, poetry, politics, and local gossip. An empath and a shrewd judge of character, he looked through appearances to your true nature.”

Smith, whose mother had come from a family of national schoolteachers, had developed a love of reading in childhood, and poetry was an abiding interest. With poet Theo Dorgan he produced a chapbook of the work of poets, including Michael Hartnett and others, in 1992 with the title Undr, inspired by a work of Jorge Luis Borges, and in the late 1990s and early 2000s served on the board of Poetry Ireland. Dorgan remarked of this that “Tommy was a rock of good sense, supportive, imaginative and always positive … He brought an unrivalled set of contacts to the table, fabulously useful as we worked to build the organisation’s reach into every corner of the island.”

A passionate Irishman, whom Theo Dorgan called “a true republican gentleman, a democrat of the old school, a believer that all should be treated equally, with respect for their dignity and a welcome for their talents”, Smith also played a central role in rescuing from dereliction in the late 1990s No 27, Pearse Street, Dublin, the childhood home of Patrick and Willie Pearse, which was saved by a combination of charitable donations from wealthy individuals, help from the Dublin Civic Trust and a grant of £500,000 from the Department of Arts. It now houses the Ireland Institute, whose long-time board member, DCU lecturer Noel Hickey, describes as being, initially, “a centre for republican studies in the broadest [international] sense,” and now, more broadly, an arts centre with a small theatre.

Hickey described Smith, who served as the institute’s treasurer from its inception until 2012, as having had a crucial gelling role as “a ginger man, the glue which held us all together; he was the one guy who knew everyone in the institute”.

Tommy Smith was one of three sons of Dan Smith, a small farmer, and Elizabeth (nee O’Reilly), of Aughacloora, Kilnaleck, Co Cavan. He is survived by his widow, Bernadette (nee Sheridan), his son, Donal, and by his brothers, Eugene and John.