‘Black Americans and Irish have a lot in common. I feel we’re connected’

‘I feel alive here,’ says Kimberly Reyes who arrived from the US in 2019 to study in Cork 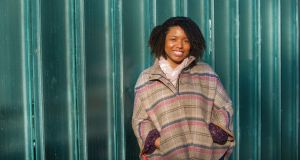 When Kimberly Reyes announced last year she had decided to study in Ireland many of her friends were shocked. “This is odd to me because as a poet, why wouldn’t I want to study in one of the greatest poetry factories in the world? But when I tell black people they’re pretty surprised and say: ‘really, Ireland?’ From my small sample group, if black Americans travel to Europe they tend to go to places like Paris.”

Upon arrival in Cork, she discovered many locals were also confused by the presence of a black American poet in their city. “You can see the look of surprise on people’s faces when I start talking. I get a lot of: ‘wow, where are you from?’ But I’m happy to talk about it. That question would drive me insane back home but here I welcome it.

“People are surprised, not only that I’m American but also that I’m well educated and probably know more about Irish poetry than they do. But it’s not just here that happens, it’s everywhere.”

Reyes believes her childhood in the New York borough of Queens prepared her for living abroad. “It’s actually the most diverse place on the planet. My particular neighbourhood was majority non-black, it was mainly Jewish, so I’m used to sticking out.”

During her studies, first at Lehigh University in Pennsylvania and subsequently at Columbia journalism school in New York, Reyes developed a fascination with the relationship between black Americans and Irish people.

“I think black Americans and Irish have a lot in common, I feel we’re very connected. We’ve produced amazing art from oppression.

Having discovered an interest in poetry while studying at Columbia, Reyes moved to San Francisco where she held a day-job as a copywriter in Silicon Valley while simultaneously working on a number of poetry and non-fiction books.

Early last year she applied for a Fulbright scholarship to further develop her skills by studying Irish Writing and Film at University College Cork. She had been to Ireland twice before but never to the south of the country.

Exhausted by her work as a copywriter on April 1st 2018 she quit her job. An hour after handing in her notice she received an email from the Fulbright programme stating she had been selected to study in Ireland.

“I upended my entire life to come here. I packed everything I owned into a car and drove it across the country by myself. I gave away 90 per cent of what I owned.”

She arrived in Cork in late August where she says she immediately felt welcomed by the city’s “literature community”.

Finding a place to live, however, was more challenging. She initially stayed in Montenotte before moving into an apartment in Barrack Street. “That move changed everything. Cork is gorgeous. I had only ever lived in big cities and definitely wanted to try a place that was a more manageable size. The city was so vibrant and you’re just a five minute walk from everything.”

The Irish housing crisis reminds Reyes of the situation she left behind in San Francisco – a city she describes as “the most perfect city size-wise” but which has unfortunately become “the playground of tech bros where artists can’t afford to live”.

“I’m frightened by what might happen here. I saw what it did to San Francisco. It’s quite frankly one of the reasons I didn’t want to study in Dublin. I felt Cork would be a little less affected by that gentrification and that capitalist grind which is the opposite of art.”

“I think it’s a little easier to live here as a artist than in the States but I would say finding housing in Cork was more difficult than finding a house in either New York or San Francisco. It’s the lack of options with a sprinkle of racism.”

While Ireland is rapidly becoming a more diverse country, Reyes says there is still a noticeable divide between white people of Irish heritage and those who have moved here in recent years.

“It seems as though while there is an increase in diversity there hasn’t been any integration. I’ll see lots of black people on the bus but if I’m in a pub at 2am it’s only me there.

“It’s one of the reasons I find being a black American here challenging at times, although black American culture is omnipresent here. I can walk into a pub that’s blasting The Notorious B.I.G. with everyone knowing every line but be given a million double-takes as though I’m an alien.”

When it comes to the integration of people from abroad, Ireland should reflect on its own history, says Reyes. “Ireland has a very unique relationship with emigration and people leaving to make a life elsewhere. Of all places I think it should be more understanding of people who have to move. Having that perspective should help.”

Reyes’s Fulbright bursary lasts for 10 months, however, she’s already planning to stay longer and has found a house for the summer with the help of a UCC professor.

“I’m a black woman – there’s not a place in the world for me where I’m not going to experience some racism but I do feel at least people here will buy me a pint while they’re asking where I’m from. I really appreciate that humanity, it’s something that other places are lacking.”

While she still sometimes struggles with the Cork accent and says she’ll never have the courage to drive “on the other side of the road”, Reyes is very happy in Ireland. She recalls feeling a real connection to the country following a recent trip back to New York. “When I flew back to Ireland, this feeling came over me as if I was coming back home. I feel alive here and am learning so much.”