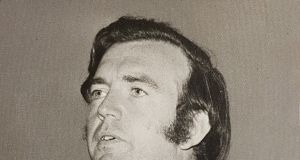 Robert Joseph (Bob) Daly, who has died at Marymount Hospice, Cork, was emeritus professor of psychiatry at UCC. He joined the university in 1971 and inaugurated Ireland’s first chair of psychiatry outside Dublin, a position he held until his retirement in 2001. During that time he was also appointed dean of medicine and clinical director of the department of psychiatry at Cork University Hospital. Those simple facts disguise what was described at his funeral as a magnificent life, deservedly celebrated and acclaimed as leaving Ireland forever in his debt.

In a letter of condolence read out at Daly’s funeral Mass Seán Donlon (former ambassador to the US and former secretary general to the Department of Foreign Affairs) wrote that as it became clear following the introduction of internment without trial in Northern Ireland in 1971 that some internees were subject to torture and inhuman and degrading treatment, the then taoiseach, Jack Lynch, asked the department to investigate.

Daly assisted in the collection of evidence to establish a case against the UK in the European court and Commission of Human Rights in Strasbourg. “That,” wrote Donlon, “was the beginning of his work on the Strasbourg case, a case which has had significant national and international implications to this day. Without Bob’s professional contributions, the case would not have had the outcome that it did… Ireland will forever be in his debt.’’

Born in London to Irish parents in 1936 – father William from Cork and mother Eileen Bennett from Cushinstown in Wexford – he attended Gunnersbury Catholic Grammar School along with his brothers, Liam and Johnny. He studied medicine at Trinity College Dublin, graduating in 1962, and after his marriage to Ruth Mitchell, whom he met at TCD where she was studying dentistry, he took up an internship in Richmond, Virginia, followed by a residency in Chapel Hill, North Carolina. With a family by then of four young children he needed to decide on a specialisation, making a choice between surgery and psychiatry and opting for psychiatry on the grounds that it would be more challenging and also more compatible with family life.

Despite his affection for the US he took up the opportunities offered by a move back to Europe, first to Edinburgh in 1967 and finally back to Cork in 1971. He was not long back in Ireland before he became involved in the Strasbourg case. From there on his career as outlined by Brendan Kelly (in Hearing Voices: A History of Psychiatry in Ireland; 2016) engaged widely on the psychiatric aspects of human rights, contributing to the Amnesty International Report on victims of torture and their rehabilitation in 1973 and to the American Psychiatry Association agm in 1976 on “the psychiatric effects of counter-insurgency operators”. As an expert on human rights with an ever-increasing interest in the psychosocial effects of interrogation techniques he contributed to the World Health Organisation Working Group on the psychosocial consequences of violence in 1983, and served as a member of the Amnesty International Medical Advisory Board which was awarded the European Peace Prize in 1986.

The biographical note in the report of the Irish Commission for Human Rights (2004) mentions his work for the American Civil Liberties Union and for victims of abuse in Latin American states and, with some danger, in the Balkan wars. He advised the Bosnian authorities on the development of a medical and psychiatric programme for victims of war and worked also as a trainer for human rights workers and the Committee for the Prevention of Torture in the Kosovo conflict.

Reports, studies, appointments and consultations with leading world psychiatric, psychosocial and human rights bodies continued through his career, during which he had pioneered the treatment of flying phobia in military and civilian pilots. He was a pioneer also in the diagnosis and treatment of post traumatic stress disorder, producing the first European paper on the subject.

Although tested by the early death of their daughter Diane, Bob and Ruth Daly were the fulcrum of a supportive, buoyant and loving family. His affection for antiques and for armoury resulted in what is possibly Ireland’s largest historically important collection of cannons. Daly was a fine singer and an excellent rifle shot. And he never lost his sense of youthful enthusiasms, a broad range that included rugby and, in his later years, making award-winning marmalade.

Pre-deceased by his daughter Diane, Bob Daly is survived by Ruth and their children, Peter, Billy, Charles Andrew and Rachel.

Do you have a Caroline Flack relationship with social media?
6

Ireland is home, and it is beautiful, and we do not talk about it enough
8