Michael Harding: Winners write the history but there are other stories worth remembering 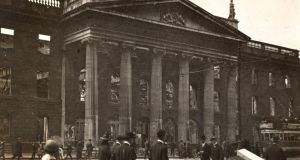 The GPO on O’Connell Street during the Easter Rising. File photograph: The Board of Trinity College Dublin

I visited a man in Mayo one time, when I was writing a film script about the Connaught Rangers; an amateur historian of that famous regiment in Ireland. In his sittingroom there were pictures of men in military uniforms. Granduncles from the late 19th century in British army fatigues, and uncles and cousins from the 20th century in Irish Army dress.

I realised that his loyalty was not to the political nation his family served, but rather to the profession of soldiering.

So it is with policemen. It’s easy to come across a cop in Chicago whose father was a civic guard in Galway or Portlaoise. And I once heard a story about a young boy in Cavan who wanted to be a policeman, so he went to Dublin and trained in the Phoenix Park, and all went well until one morning his sergeant announced that a crowd of hooligans had taken over the GPO.

So like other recruits of the time he found himself on the streets: On Bachelors Walk in particular, lying against the wall, with a rifle, in the teeth of a revolution he knew nothing about.

Although the conflict hardened his heart, and by the time the Free State was established, he decided to head up into Fermanagh, where he continued as a policeman in the RUC.

A line had been drawn on the map, to establish Cavan and Fermanagh as belonging to separate nations and he understood the absurdity of it, but he patrolled it nonetheless

Having seen war up close he was wise enough to keep his head down and his mouth shut. He kept the barracks tidy, and spent decades serving summonses on locals for poteen making, or capturing sleeping pigs from river boats as they were being smuggled up river, or arresting donkeys on old bog roads as they meandered across the frontier, ladened with flour or tea.

A line had been drawn on the map, to establish Cavan and Fermanagh as belonging to separate nations and he understood the absurdity of it, but he patrolled it nonetheless.

One night when his hair had turned grey and he needed braces to hold up his trousers the barracks was attacked. He ordered young policemen to take rifles and lie up against the wall outside just as he had done, and aim their weapons at the republican enemies in the dark.

When the assault was over, one policeman lay bleeding, and the sergeant didn’t need a pathologist to tell him that the officer had been shot in the back.

Some of his colleagues had taken advantage of the chaos created by enemy fire, to eliminate at least one Roman Catholic from the ranks of the RUC.

The old policeman knew history was a tricky business, and his mouth remained shut, and he found consolation in his weekly trips to his home place in west Cavan, up in the hills, where he dug ridges every springtime as straight as his neighbours and planted potatoes and carrots. He lifted them in autumn and filled the boot of his car with rich produce before driving back down into Fermanagh to distribute them among his neighbours.

Not that his neighbours were overwhelmingly friendly. They knew which side of the spade he dug with, and one day a colleague came into his kitchen and noticed gigantic scallions strewn on the table and wondered where they came from.

“I saw no garden on the way in,” he commented.

“I have a bit of land across the Border,” the policeman confessed; “it belonged to my father, and I go there sometimes just to keep it tidy.”

But I suspect he dug his spuds in Cavan for more reasons than just to keep the old homestead tidy. The old house had long fallen in, and nettles grew tall in the rubble that once was his mother’s kitchen. And no matter how life and conflict had torn him asunder, and no matter how he had found it necessary to remain afloat in the turning waves of history, nonetheless he could never wrench his heart away from what he loved; the land and the spade and the early spuds in the opened ground.

It was his son that told me the story.

We were watching the Easter Commemorations on television in 2016.

I looked at him with admiration.

“Don’t misunderstand me,” he said. “He wasn’t in the GPO. He was on the outside. On the wrong side.”

So I turned off the television and he told me the story; because the winners write the history but there are always other stories worth remembering.