Thanks for nothing: How newly-weds with a ‘lot of nerve’ lost friends

A couple have been castigated for their tardy thank yous. What should they have done? 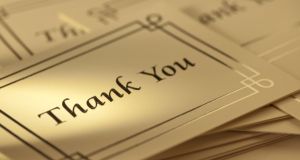 Saying thank you in writing: old-fashioned or compulsory? Photograph: iStock/Getty

Pity the poor newly-weds who were castigated for not sending thank-you cards, even though it had been only a few weeks since their wedding. The couple received a note, which a friend then posted to a Reddit group, from a guest complaining that they had a “lot of nerve” asking for money for a wedding present, and then not even sending a thank-you note.

If the stopwatch starts as soon as the last drunken relative has been peeled off the dance floor, when is the appropriate time to send thanks? We are living in a faster age – traditionally, couples had a year to get around to it, says the etiquette expert William Hanson, host of the podcast Help I Sexted My Boss. “But in this more time-sensitive day and age, that is too long. Up to two months is more than enough time.”

Thank-you notes, instead of being old-fashioned, are, he says, “compulsory if you have been given a present or received hospitality. A text or phone call is better than nothing but is not the same and doesn’t convey as much gratitude.” For a dinner, lunch or party, “you need to get the letter in the post within two days after the event”.

Your choice of stationery can say a lot about you and how you interpret gratitude. A tatty piece of paper with scrawny handwriting won’t quite cut the mustard

One side of paper or a card is enough – although if you’ve stayed for two nights or more, Hanson says, you should write two pages. Just one sheet will do for Christmas and birthday presents. “For Christmas, you have four to five days to post them.”

How do you fill a page or more with praise and thanks? Hanson advises, perhaps counterintuitively, that you avoid starting a thank-you note with “thank you”. “Not for any etiquette reason, but it sounds better. I usually go with: ‘Dear Emine, That simply was the most delicious organic spelt-flour brownie you served us last night! Thank you so much...’ etc.” You can get away with two or three sentences, he says, for shorter letters.

Will a sheet of A4, pulled from the tray of your printer, do? “Something half-decent is always preferable,” he says. “Your choice of stationery can say a lot about you and how you interpret gratitude. A tatty piece of paper with scrawny handwriting won’t quite cut the mustard as much as something on crisp paper and nicely scribed.”

But be compassionate about other people’s time pressures. That bride and groom hadn’t left it too late, he says. “Although as for asking for cash for your wedding present – that’s a big no!” – Guardian