‘I adore the way people speak English in Ireland. The language is amazing’

New to the Parish: Polina Cosgrave came to Ireland from Moscow in 2015 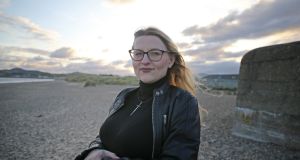 Originally from Volgograd in southern Russia, Polina Cosgrave came to Ireland after living in Moscow in 2015, to write.

“Ireland has such a rich literary tradition,” she says. “It’s the land of words. There are a lot of treasures to explore.”

Cosgrave read her first book in English at the age of 12, and wrote short stories in English in her teens; she later trained as a linguist, and worked with creative writing groups in Russia.

You’re very inventive in Ireland. It’s like people have their own private type of Irish thinking

After visiting Ireland as a tourist, she returned to work and study, thinking she would move on to another country after some time, but soon found herself settling down in Dublin.

“It’s like when you choose a partner. You have a flutter – and you think, let’s go for it... it’s not a logical decision. But I felt good.

“I’ve been writing all my life. But I missed the English language, I wanted to do something with it... there’s not much you can do with English if you don’t leave Russia.”

Since moving to Ireland, Cosgrave has become more fascinated by the English language, because of the idiosyncrasies found in the way it is spoken here. “I adore the way people speak. The language is amazing. It’s English, but it’s so different, it has so many different aspects to it.”

Cosgrave learned English according to American pronunciation, so adjusting to Irish accents, and regional differences was “a puzzle for the brain”, she says.

“There are constructions which aren’t in the language in English. You can only find them here, in people speaking. I probably would understand more if I knew Irish, I’d understand why people speak the kind of English which they do, but I’m trying to explore that.”

Cosgrave says she finds Irish expressions and idioms interesting: “You’re very inventive in Ireland. It’s like people have their own private type of Irish thinking, and then it happens that they have to use English for communication.”

The English spoken in Ireland “has more humour, more charm, it’s a bit mysterious”, she says.

Learning how to pronounce Irish names has not proven challenging to Cosgrave, though, as she has researched aspects of the Irish language in order to understand the pronunciation and spell names more easily.

Soon after Cosgrave moved to Ireland, she sought out a writers’ group, to be able to share her work and hear others share theirs: “I was amazed... the level of acceptance here is amazing.”

“In Dublin, the artistic community, writers, they’re very welcoming. There are loads of opportunities to meet people, it’s so open.”

Cosgrave’s work was recently included in a book of poetry centred on the idea of “home”, along with 49 other poets who now live in Ireland but were born elsewhere.

“Home is the first thing you start writing about. Some people say immigration is almost like a psychological death; or that it’s as big a thing as getting married, or having a child, it’s a major change. That strikes you. When you find yourself somewhere new, you try to make sense of the world.

“When I was first here, the first thing I started writing about was seagulls, because there were so many. I focused on what was funny about them. You need to make your own sense of things around you. I’ve been doing that for three years. Writing helps me to do that.”

Cosgrave says she has felt freer, creatively, since moving to Ireland.

“I identify as a Russian person. I spent 27 years there. It’s all important to me, the language, the culture. But here, it’s like a second chance. I can do whatever I like – here, people think that it doesn’t matter what you do, if it makes you happy.

“When I wrote in Russian, I treated writing as a more important aspect of my life than life itself. Here, it’s changed. I now care more about being happy and healthy daily, and not just writing daily. Turns out I can be so many other things.”

I can go to my neighbours for tea at 11 o’clock at night if I want, I haven’t had that in 15 years

A published poet and short-story writer, Cosgrave worked in translation when she first arrived in Ireland, helping Russian speakers who did not speak English to communicate in Irish hospitals and courts. It was a crash course in Irish society and culture: “Writing is great, but you can get carried away from reality, which I don’t think is a good thing,” she says. “So I think it’s very nice to be aware of what’s going on, and what really matters.”

Growing up, in the USSR and former USSR, there was a stronger sense of community than Cosgrave found living in Dublin city centre, but now that she lives in the Co Wicklow town of Arklow, she says she has found it again: “I can go to my neighbours for tea at 11 o’clock at night if I want, I haven’t had that in 15 years.”

“She’ll have two languages. She will have a big choice of cultural material.

“My Armenian grandfather, he spoke Russian better than Russian people. He read more than anyone in our family. Does that make him more Russian? It’s about what you treasure. My daughter might treasure kickboxing – or something else, who knows – and she might then tell me to go away with my Tolstoy, and I’ll say ‘fair enough’.”

Cosgrave’s daughter will be part of another generation of children growing up in Ireland with a mix of different cultural and linguistic backgrounds, something which she finds interesting. She plans to learn Irish, as her daughter learns it in school, and reflects on the different ways in which they will view their home in Ireland.

“It reaches Irish culture, when you have so many people coming here… I can bring something new.

“The generational change is very interesting to me – I wonder, ‘who will I raise?’”

Polina Cosgrave is one of the contributing poets featured in Writing Home: The ‘New Irish Poets’, out now from Dedalus Press