‘Send it to me next year’: The Christmas card sent between two friends since 1956 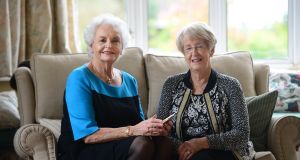 Eunice Baily (left) and Clare Brazil have been exchanging the same Christmas by the post since 1956. Photograph: Bryan O’Brien/The Irish Times

Eunice Baily was 16 in 1956 when she first gave a Christmas card to her school friend Clare Brazil. More than six decades later, that very same Christmas card is still being sent back and forth between the two women.

“Isn’t it a credit to the post office that it’s never been lost,” says Eunice, as the women sit together in Clare’s home in Co Waterford, reading the card and reminiscing.

The pair were pupils at St Mary’s, the Ursuline convent boarding school. They left in 1957, and that December, Clare returned Eunice’s card with the message: “Does this bring back happy mems! Send it to me next year.”

Over the past 63 years, the card has been posted between Waterford and Kerry, Cork, London, and Dublin. It became a festive tradition.

The original card – with a black and white image of the three wise men on the front – came from the Pioneer Total Abstinence Association, sent to Eunice with a magazine when she was appointed secretary of the school’s branch. It now has three additional sheets of card inside, bound together with thread. The brief annual greetings offer only a glimpse into the lives that unfolded over the years, before and since.

The duo first met as second-year boarders. Eunice was from Tralee in Co Kerry, Clare a Waterford City local. “We clicked,” Clare says, “because neither of us liked hockey.”

Together they recall the adolescent thrill of travelling to school on the train “full of boys going back to De La Salle and Rockwell”; of outdoor clothes hanging in the attic of the school to be fumigated “with a sulphur candle” to prevent measles or chicken pox; of lining up to wash with tin basins and jugs – their vests kept on for modesty; of early morning Mass; of bread and butter with golden syrup for tea; and walks in the grounds, which included a farm and a domestic science college.

Both were in the choir – “a great way of getting out of school” – and the orchestra. Clare was first violin and Eunice double bass, “because I was the only one big enough to bring it down the corridor!” There were dramas and musicals, and debates on Sunday evenings.

“On ordinary evenings you’d sit around sewing and mending, and they might read a story to us,” Clare says. Eunice became “an expert darner”. “I would darn for other girls as a birthday present.”

By the time they sat the Leaving Certificate, only eight girls remained in their year. “That’s like a big family,” Brazil says. “We were all in the same dormitory, the same classroom. We knew each other so well.”

Clare left Waterford to study pharmacy in Dublin. Eunice, who was destined to study law and join her father’s practice in Tralee, learned shorthand and typing, and ended up joining the bank.

“We all stayed friends,” Clare says. “I shared flats in Cork and London with Fionnuala and Irene, who were in the Ursulines with us too.” And every Christmas, year after year, the card would be sent between Clare and Eunice, with just a snippet of information about their lives, and loves.

1961
Don’t dream of losing this as this stage! I’m hoping it will be in circulation when we’re grandmothers – but we’ve to get husbands first! Have a lovely Christmas. Eunice

By 1961, Clare was still in Dublin, living in one of a series of “grotty Rathmines flats”. There wasn’t much socialising: “Nobody had money. A fellow from Cork invited me to a dress dance in The Shelbourne. He came to pick me up on his bike, to bring me in on the crossbar – in my dress!”

Eunice worked first at the Provincial Bank in Cork, flat-sharing with Maeve Binchy. “I had known her since I was 14. We met on holidays in Ballybunion. Our fathers were friends and colleagues. The flat was over a sweet shop. Its kitchen ceiling was so low you could either wear rollers in your hair or high heels, but not both. We would light fire lighters to keep warm, because nothing else would stay alight. Maeve used to say, ‘when the fire goes out …we go out.’ We had great fun together.”

1962
I’ll bet you didn’t expect this – it’s the only card I sent this year. I wrote you a long letter but forgot to post it…Am glad you’re still a member of the Spinster Club. I hope this time next year neither of us will be. If the Pioneers could only see you now! Clare.

1963
Well! I guess some of us have it & others haven’t Mrs Brazil! Let’s hope I make the grade this year but it’s doubtful. Eunice

Clare returned to Waterford and married Donal Brazil, who she knew from “up and down the hill” – John’s Hill in Waterford City – where they still live today. Orla, their eldest, was born in 1964. She died before she was 10. Michael, their second, still lives with them. A picture of him meeting President Michael D Higgins hangs near their front door. Photographs of their other four children, and three granddaughters, are dotted around their sunny home.

The card’s short messages over the years only hint at this ebb and flow of the women’s lives, with moments of great happiness and sadness.

1984
I fear that this record of our friendship will never be serialised in the Sunday Times unless we say something more interesting each year than Happy Christmas. Love Eunice.

1985
Sara says this is pathetic (the “in” word at St Angela’s) it is so boring. Imagine it is almost 30 years a going! Clare

1987
Sara is thinking of starting one of these cards, now that she is in 5th year, she’s wondering who’d be around in 31 years time. Love, Clare.

1996: 40th anniversary of card
To dear Clare. It is the only card I’ve sent on this card’s 40th anniversary, as my mother died this sad year. Love Eunice. (Thank you for coming to stay with me in Tralee after she died.)

Between Christmases, both women travelled extensively, and there is some reference in the messages to these trips. Eunice’s wanderlust began in 1960 with a trip to Paris. “Then I was on the first of the package holidays to Sitges and Torremolinos. You’d know the Irish because they’d be coming down to the beach with Roches Stores plastic bags.”

Later travels took her to North America, Hong Kong, China, and around Europe. “After I retired from the bank in 1998 in Dublin I could travel for longer periods, to places like South America, Canada, even Alaska. I’ve had great adventures.”

In her 60s, Eunice began joining the Brazils on tours organised by Friends of the Waterford Museum of Treasures. “We’ve been to Venice, Madrid, Berlin, Bologna… loads of places together,” Clare says.

2005
Dear Eunice, what a good life we have. This year we’ve met in Florence, La Rochelle and Ile de Ré & had a good time together. We’ll have our first grandchild next June. See you in Madrid before that, I hope. Love Clare

2010
The year I went to Cancun, Mexico to Garrett’s wedding and while there swam in turquoise seas on my 70th birthday. My lovely sparkling niece, Anne, passed away from cancer aged 38 in November – a huge loss to me. Love Eunice.

So what’s kept their friendship alive, and the card going back and forward? “Chit chat and things in common,” Clare says. “And your hospitality,” adds Eunice. Underpinning everything is the bond they formed as schoolgirls.

2007
The year we celebrated 50 years on from our time in St Mary’s, met all or most of the class in Faithlegg House Hotel. We’re waiting for a new baby. Christmas comes around all too quickly now Eunice! Keep well, love Clare

This year the card is due to travel between Dublin and Waterford. “Maybe I’ll just leave it with you now,” Eunice suggests. “I don’t want to risk it getting lost at this stage.” She takes out a pen and begins to write:

2019
Happy Christmas Clare. The year that you, me, and the card achieved fame.