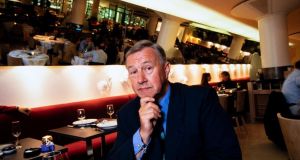 Terence Conran at the opening of his restaurant Mezzo, in Soho, London, 1995. Photograph: David Levenson/Getty

Terence Conran, a London designer and retailing magnate who eased the gloom of postwar British austerity with stylish home furnishings affordable on a teacher’s salary, and then suffered financial reverses before reinventing himself as an international restaurateur and doyen of modern design, died on Saturday at his home in Berkshire, England. He was 88.

His family confirmed the death in a statement, without specifying the cause.

Blind in one eye since childhood, Conran was an entrepreneur of mercurial moods and missionary zeal who created an empire to market his designs, shops known in Europe as Habitat and in the US as Conran Shops. After his business declined, he opened restaurants in London, Paris and New York – notably Guastavino’s, a dining cathedral under the tiled terracotta arches of the Queensboro Bridge in Manhattan.

He wrote scores of books on design, cooking and other subjects; turned a London warehouse riverfront into a fashionable South Bank commercial development; founded the Design Museum, Britain’s only museum for contemporary products and architectural designs; and was knighted by Queen Elizabeth. He also married four times, had five children and collected wildflowers, butterflies, old master paintings and Bugatti pedal cars.

Detractors called him a cynical self-promoter who sold simplistic ideas to the masses, such as “democratised luxury”, and struck it rich with a sure thing: the inevitable desire of Britons to climb from grinding wartime privations into a consumer class that could afford to replace the threadbare old sofa with something seen as “modern” and in “good taste”.

But admirers said he tried, with remarkable success, to revolutionise the sensibilities of a rising British middle class, offering not just better food but an idea of what a sunlit breakfast on Sunday should be; not just mod touches for the drab suburban semi-detached but a taste of la dolce vita: Scandinavian furniture, Italian lighting, French cookware, Bauhaus-style modular shelving and splashes of Pop Art on the walls.

In a career that spanned six decades, he had only one actual job: at 19 he worked briefly for an architect who helped design the 1951 Festival of Britain, a national exposition intended to give Britons a sense of recovery from the war. It also gave him a frank look at a people weary of shortages and a glimpse of the future of commercial design.

“They came along in their dreary wartime mackintoshes, gas-mask cases filled with Spam sandwiches, and found bright cafes, music, flowers, modern furniture and a spirit of something that none of them had ever experienced in their lives,” Conran said in 2011.

Over the next decade he designed simple furniture and sold it in an arcade in Piccadilly; opened his first restaurant, a sandwich-and-salad bar called Soup Kitchen that had one of London’s first espresso makers; and created new lines of fabrics and moderately priced, functional home furnishings.

In 1964 he opened his first Habitat store in Chelsea. Its staff had uniforms by Mary Quant and hairstyles by Vidal Sassoon.

By the late 1980s, after acquiring other chains, he owned 900 shops in Britain, Europe, Japan and the US, selling furniture, housewares and clothing. His company, the Storehouse Group, had 35,000 employees and billions in revenues.

But overexpansion – including additions to the upscale Butler’s Wharf on the Thames, where he installed his Design Museum in 1989 and lived in a glass penthouse – corroded his empire. So did his failure to integrate interests reaching into publishing, office products, architecture and real estate. He resigned as chairman in 1990. Storehouse was dismantled, and Habitat was taken over by Ikea.

Blinded in one eye

Conran kept some Conran Shops and recovered in the 1990s, opening many theatrically dazzling restaurants, including Le Pont de la Tour and Mezzo in London, Alcazar in Paris and Berns Salonger in Stockholm. In New York, he and his partner, Joel Kissin, opened Guastavino’s in 2000 under the Queensboro Bridge. The site was dramatic but out of the way, and a few years later became a catered event space.

Terence Orby Conran was born on October 4th, 1931, in the London suburb Kingston upon Thames, to Gerard and Christina (Halstead) Conran. His father was a businessman. His mother, who had a taste for art, nurtured Terence’s creative talents. When he was 13, his left eye was permanently blinded by a sliver of metal that flew up from a lathe he was using.

He attended Bryanston, a private school in Dorset, and the Central School of Arts and Crafts in London. He did not graduate, but a teacher there, the sculptor Eduardo Paolozzi, became a lifelong friend and mentor.

His first marriage, at the age of 19 to the architect Brenda Davison, lasted six months. He and his second wife, the novelist Shirley Pearce, had two children, Sebastian and Jasper, and were divorced in 1962. He and his third wife, the food writer Caroline Herbert, had three children, Edmund (known as Ned), Tom and Sophie, and were divorced in 1996. He married his fourth wife, Victoria Davis, in 2000.

He is survived by his wife and his children, as well as 14 grandchildren, one great-grandchild and a sister, Priscilla.

Conran became a disciple of Elizabeth David, whose books Europeanised British cooking. Besides design and cooking, his own books explored home furnishings, textiles, gardening and other subjects. – The New York Times