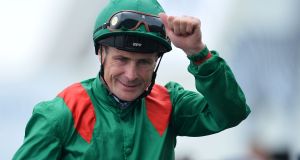 Pat Smullen celebrates after winning the Derby on Harzard at the Epsom Derby Festival in 2016. Photograph: Glyn Kirk/AFP via Getty Images

Pat Smullen was nine-times champion jockey on the flat in Ireland and enjoyed top class success around the globe during one of the finest riding careers in modern Irish racing history.

If Michael Kinane pioneered how riders based in this country could succeed at the highest level around Europe and beyond, then both Johnny Murtagh and Smullen followed in his wake.

It was Smullen who stepped into Kinane’s shoes as stable jockey to Dermot Weld in 1999.

The Weld-Smullen partnership subsequently endured for almost 20 years, helping the jockey to nine Irish Classic victories and three others in Europe.

The high point was when Smullen guided the Aga Khan’s colt Harzand to Derby glory at Epsom in 2016. Harzand was also successful in that year’s Irish Derby.

Smullen described winning the Epsom Derby as a defining moment. It cemented his reputation as a supreme professional as comfortable on the biggest stage as at an ordinary midweek fixture.

It also confirmed a remarkable ascent to the top of the sport for the man from Rhode in Co Offaly who grew up with no background in racing.

His father worked as a farm labourer and it was when Smullen’s older brother started working with horses, and got a job with former jockey Joanna Morgan, that the seeds for a future champion were sown.

Smullen was 13 when Morgan put him on a pony for the first time.

“It really is true what they say about being bitten by the bug. I knew the second I put my leg over the pony that this is what I wanted to do,” he recalled.

Apprenticed to trainer Tom Lacey after leaving school at 15, Smullen was twice champion apprentice. But it was a chance ride for Weld on Token Gesture in the 1996 Park Stakes at the Curragh that he described as the turning point of his career.

Token Gesture won in a close finish, a fact Weld recalled when looking for a jockey after Kinane moved to ride for Coolmore Stud in 1999.

The following year Smullen was champion jockey for the first time. In 2001, he and the horse, Vinnie Roe, owned by film director, Jim Sheridan, won the first of a record four Irish St Leger victories. In 2002, Smullen won his first English Classic, the 2,000 Guineas, on Refuse To Bend.

Later that year he won the Matriarch Stakes in Los Angeles on Dress To Thrill, a race in which the young Irish jockey got the better of a handful of America’s greatest riders.

In 2001, Smullen married Frances Crowley, a former jockey who became the first woman to train an Irish Classic winner with Saoire in the 2005 1,000 Guineas.

More than once he was linked to the job as No 1 jockey to Aidan O’Brien’s Ballydoyle operation but instead remained loyal to Weld.

Their top-grade successes together also included the 2004 Irish Derby on Grey Swallow, the Ascot Gold Cup with Rite Of Passage five years later, and the Champion Stakes in 2015 on Fascinating Rock.

Weld described his former jockey as “the professionals’ professional”. Ultra-competitive in the saddle, off it he was a calm, reasonable and articulate figure who was widely popular within racing.

It was a reputation that promised even more of an international profile as Smullen reached his peak as a rider.

However, shortly before the start of the 2018 season he began to feel unwell and he was diagnosed with pancreatic cancer.

Smullen fought the disease with typical courage and resolved to return to race-riding. Initial treatment appeared to be successful but in May 2019 he retired as a jockey on medical advice.

Grateful for what he viewed as “the ultimate second chance”, the former champion threw himself into fundraising for cancer research.

The Pat Smullen Champions Race for Cancer Trials Ireland event was staged at the Curragh on the second day of Irish Champions Weekend last year.

Some of the most famous names in racing came out of retirement to ride in a race which ultimately raised more than €2.5 million for cancer research.

Having planned to ride in the race himself, Smullen had to announce a month beforehand that was undergoing more chemotherapy.

The fortitude and courage he showed throughout his illness captured the public imagination beyond sport.

President Michael D Higgins said that Smullen’s remarkable performances at home and abroad brought joy to so many.

An Taoiseach Micheál Martin paid tribute in the Dáil to “an iconic figure in the racing world” and saluted his “courage and commitment to cancer care”.

The Cancer Trials Ireland association said that people diagnosed with pancreatic cancer in Ireland will feel the benefit of Smullen’s money-raising efforts for years if not decades to come.

Patrick Joseph Smullen is survived by his wife, Frances, his daughters, Hannah and Sarah, his son Paddy, and his wider family.

What will €250 buy in Dublin 7 and Co Clare?
Real news has value SUBSCRIBE