Why did the magazine put the word woman in quotation marks? A backhanded compliment? Or tone deaf to implications? 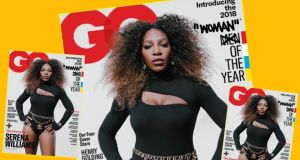 Could GQ be trying to insult Williams by implying that she is not a real woman? Is the magazine trying to say she is a hypothetical woman? An ironic woman? Or might it be a kind of backhanded compliment, meant to suggest that she is such an excellent person that she’s practically an actual man? Or does it just not understand what a quotation mark is for?

The humble quote is to Virgil Abloh what the capital letter is to Donald Trump. It is a way of emphasising that he really, really ‘means’ it

None of the above, it seems. The magazine’s explanation is that the designer Virgil Abloh, a DJ and music producer who has collaborated with Williams on clothing lines, just really likes quotation marks. They are “his thing”, and he uses them everywhere as part of his “unique style”.

The humble quote is to Abloh what the capital letter is to Donald Trump. It is a way of emphasising that he really, really “means” it. His website is called “Website”, for example, and when he designs a scarf he sometimes writes “Scarf” on it. Geddit?

So should people really be getting exercised about a stray pair of quotation marks?

We know why it "normally" would be in quotes.

But we believe "the artist" & @GQMagazine might have realized that, given the "history of abuse" @serenawilliams has suffered & the names hurled at this "goddess" & #GOAT, GQ might have fought to skip "quote marks" just "this time." pic.twitter.com/zznqrTAfVN

Here’s the thing. Whatever Abloh or GQ think they’re saying with this incredibly grating affectation – and, admittedly, I speak as a “middle aged” grammar pedant – quotation marks used in this context are understood by every other English-speaking person on the planet to imply you don’t necessarily approve of, or mean, the word in quotes.

At a time when there is a lot of justifiable concern about how women of colour in general, and Williams in particular, are dehumanised and masculinised, this is, at least, a gaffe.

Just two months ago (coincidentally, around the same time as this cover was being signed off, which a very cynical observer might suggest is not a coincidence) the Melbourne-based Herald Sun published a cartoon rendering Williams in a full-blown tantrum, jumping up and down on her racket, her face contorted until it looked more animal than human, after she had a confrontation with the referee during the US Open. At the time, observers including Bernice King, the chief executive of the King Center and daughter of Martin Luther King, drew attention to what many felt was a racist and sexist portrayal of Williams’s facial features and pose.

Research published on “the Jezebel stereotype” in the journal Psychology of Women Quarterly in the aftermath of the cartoon controversy found that black women are more likely than whites to be both sexually objectified and perceived as less than fully human.

Most GQ readers will presumably pick up the magazine with no notion that the quotes are a fashion thing, and will instead deduce some attempt at irony going on

A pair of stray quotation marks around the word “woman” is not a barb on the same scale. It is probably not meant as a barb at all: Abloh is the designer who created a tutu for Williams after she was banned from wearing a catsuit, so he is hardly likely to be insensitive to what she has described as a history of abuse, any more than GQ is.

But it is still arguably tone deaf. Most GQ readers will presumably pick up the magazine with no notion that the quotes are a fashion thing, and will instead deduce some attempt at irony going on.

Earlier this year, in an open letter to her own mother, Williams wrote about how she has been described as not a real woman because of her physique: “I’ve been called man because I appeared outwardly strong. It has been said that that I use drugs (No, I have always had far too much integrity to behave dishonestly in order to gain an advantage). It has been said I don’t belong in Women’s sports – that I belong in Men’s – because I look stronger than many other women do. (No, I just work hard and I was born with this badass body and proud of it).”

Try harder next time, GQ. Then again, people are talking about the magazine, so maybe this less of a gaffe and more of a “gaffe”.