She says, ‘My sister was with Ross once,’ and puts up a picture of a small sausage 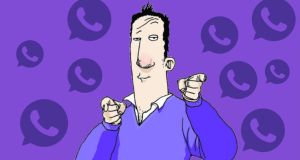 It’s, like, five o’clock in the morning when it storts. I’m still in bed when Grainne Lessing posts a message on the Mount Anville moms WhatsApp group to say there’s a gorda speed van on Newtownpork Avenue and be careful if we’re passing.

On the Mount Anville Mid-Term Trip to Dordogne WhatsApp group, Orlaith Stapleton says, “By the way, in case you missed it, that was Grainne’s not-so-subtle way of letting us all know that Morcus is on the Willow Pork swimming team this year.” Vanessa Mitchell says, “Hilarious!” Rebecca Leahy says, “LOL!”

I’m now a member of nine Mount Anville-related WhatsApp groups. It wasn’t Fear of Missing Out as much as Fear of Being Talked About. So this is my life now. I don’t know how I ever found time to work.

Orlaith Stapleton says, “Omg just had the total fear that Grainne was in the Mid-Term Trip to Dordogne WhatsApp group!” and Sally Ann Markey says, “No, Grainne said there’s no point in sending Hester on the trip because they own a place in Dordogne – with a vineyord!” Helen Hall says, “Er subtle much?” Vanessa Mitchell says, “Lol.” Alva Crowe says, “Go, Sharks!” and then a few seconds later, “Sorry, that was meant for the Willow Park swimming group. Garvan is a substitute on the team this year.”

Rachel Lynch tells everyone in the moms group that she was actually pulled over by a gorda recently who accused her of texting while she was driving. Cho Hye-Ji says, “That’s terrible.” Helen Hall says, “So unfair.” Mallorie Kennedy says, “Have they nothing better to do, these gords?” Rachel Lynch says she actually said that to him: “I asked him would his time not be better spent carrying out imaginary breathalyser tests? Well I didn’t actually say that but I certainly thought it! The focking bogger!”

Just got caught slagging off that little b**** Honor O’Carroll-Kelly! Her dad is in the orchestra group so be careful

Helen Hall messages everyone in the orchestra WhatsApp group to say, “Rachel Lynch is telling the story about being pulled over for texting! Lol!” Mallorie Kennedy says, “The hilarious thing is that she WAS actually texting! AND she got two penalty points.” Grainne Power says, “Not being a bitch but if anyone has anything to fear from an early morning breathalyser test, it’s Rachel!” Helen Hall says, “No way!” Mallorie Kennedy says, “Way!” Alva Crowe says, “Well, you couldn’t blame her, being married to that w**ker.”

Orlaith Stapleton messages everyone in the hockey WhatsApp group, going, “By the way, in case you didn’t get Grainne Lessing’s 5am message, HER SON IS NOW ON THE WILLOW PORK SWIM TEAM!” Rachel Lynch says, “Lol.” Rebecca Leahy says, “LOL!” Ferne Brannigan says, “Morcus pushed Jemma into the pool in the National Aquatic Centre two years ago and she nearly drowned. When I brought it up with Grainne, she didn’t even apologise. She just said, ‘Oh, yes, Morcus was mortified by that whole business!’”

Susan Brennan messages the moms group to say, “Thanks for the info re the speed van. I’m on my way to Newpork now. I don’t know if I mentioned that Dorra is on the swim team this year.” No one responds.

But Rebecca Leahy messages everyone in the drama group to say, “Susan Brennan lol!” Alva Crowe says, “Tone deaf!” Cho Hye-Ji says, “Did you see the STATE of those runners she was wearing two coffee mornings ago in Gleego’s?” Rebecca Leahy says, “They were actually Balenciaga!” and Alva Crowe says, “Yeah they’re actually MADE to look wrecked!” Vanessa Mitchell says, “I didn’t hear anything about coffee mornings in Gleego’s.”

Rebecca Leahy messages everyone in the Gaeilgeoiri group to say, “Vanessa knows about Gleego’s! Cho just opened her big mouth!” Oonagh Ni Charthaigh says, “Speaking of coffee mornings, has anyone else noticed that Alva Crowe always orders a huge muffin when we’re in the Merrion Tree Bistro and then NEVER eats it? She puts it in her bag and ‘supposedly’ eats it at home!” Maire Ni Bhraonain says, “And what’s she like ordering hot water?!!!” Alannah de Nais says, “Lol!!!” Cait Needham says, “That’s why she has no arse!”

Mallorie Kennedy says, “I was only joking, Ross!” Helen Hall says, “Me too!” Maoliosa Byrne says, “I actually knew you were in this group!” and then a few seconds later she messages the drama group, saying, “Just got caught slagging off that little b**** Honor O’Carroll-Kelly! Her dad is in the orchestra group so be careful.”

Liz Bryant says, “I kind of fancy him a bit,” but then Beibhinn Murray says, “My sister was with him back in the day – as in WITH with,” and then beside it she puts up a picture of what looks like a small sausage.

Liz Bryant says, “Hang on, isn’t he in the drama group as well?” and Maoliosa Byrne says, “I knew that as well! I was only joking, Ross!”

Last couple in paradise: The Covid-19 honeymooners stranded in the Maldives
3

Coronavirus and Cystic Fibrosis: ‘It’s hard not to be nervous about it’
Real news has value SUBSCRIBE