After ‘Bake Off’, say hello to ‘The Great Irish Write-Off’

Hilary Fannin: What TV show could ever compete with all that moistness and stiffness? 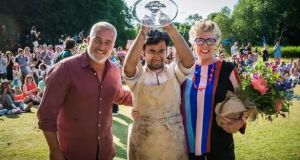 Paul Hollywood and Prue Leith with Rahul Mandal, winner of ‘The Great British Bake Off’.

I’m depressed. I’m dragging myself out of bed in the mornings and sitting slumped over a half-eaten dish of overnight oats in my tear-stained dressing gown while I stare wistfully through the grubby windows, each grimy smear illuminated by a low November sun. My life feels empty somehow, the days unravelling into a half-baked eternity like an ever-so-slightly-runny batter.

Yep, The Great British Bake Off 2018 has drawn to a close. The sun has set on all those pistachio-flavoured Genoese sponges as surely as night follows day.

I’ve become addicted to the show over the past few months, finding myself slack-jawed in front of the box every Tuesday evening, entranced by Rahul’s ghugni chaat tartlets or Briony’s apple-cider empire biscuits. Nothing was allowed to interrupt my viewing pleasure; a really excellent plot line for my as-yet-unfinished novel could have been limping around the kitchen with a sign on its back saying “write me”, and I still wouldn’t have budged.

I was especially fond of the Bake Off “signature challenge”, a segment of the show where contestants were asked to create a cake that resonated personally. You know the kind of thing I mean: a squashed chocolate hedgehog for the taxidermy enthusiast in your life, or a birthday cake for raging old Auntie Doris made out of empty gin bottles and lipstick-stained fag ends, finished with a bitter-word ganache.

Oh, but I shouldn’t look back. It’s time to wake up and smell the coffee cake, and accept it’s going to be a whole year without the thrill of watching someone achieve perfect penetration with their drizzle.

All good things come to an end, eh? The show is crusted and dusted for another season, the tent poles have been taken out of the baking-hot marquee. Prue Leith has put her chunky necklaces back in the toy box, Paul Hollywood has taken out his coloured contact lenses and fired them into the back of the bread bin, and the sad truth is that Tuesdays have just got a little colder. What are we to do without Bake Off’s good clean fun? What viewing pleasure can possibly compete with all that moistness and stiffness and finger-licking buttery creaminess, whipped up over a soggy bottom?

Maybe our national broadcaster could produce a series of its own, something quintessentially Irish to stir our damp souls and make our imaginations stand up in stiffened peaks. (Though overheads would have to be low, obviously, given the smaller size of our bedraggled population.) A home-grown contest would need to be something that engages the Irish psyche without requiring quite so many eggs and refrigerators, so maybe RTÉ could buy a second-hand yurt, fill it with empty coffee cups, balled-up paper and blunted pencils, throw in a blast of dry ice (to represent a smattering of existential anxiety) and bring us ‘The Great Irish Write Off’.

It’s not like we’d run out of contestants; the country is stuffed full of aspirant writers, with Booker prizes stacking up like pancakes and groundbreaking new Irish novels dropping out of the skies like spent geese.

You could get Marty Morrissey and Dana to present GIWO and every week there’d be a technical challenge, such as the careful use of the past participle or heartfelt reminiscences that must include mothers, nuns, bogs and inland waterways. And there could be themed weeks when the writers are asked to produce snappy pieces of flash fiction about losing one’s virginity to a married actor under a dusty St Brigid’s cross.

I don’t know though, it might never catch on. People probably prefer cake to art. Cake generally makes people happy, while art can kind of make people want to have a nap.

Contestants could produce edible show-stoppers inspired by all those gender-biased souvenir tea towels inked with faces which suggest that the only real Irish writers are dead male ones. Or else they could make Wildean tea cakes liberally sprinkled with aphorisms. Or Brendan Behan banana bread spiced with the vernacular. Or a Beckettian Black Forest gâteau with a single tree as a centrepiece, or Joycean Gorgonzola and Burgundy tartlets . . .

Or maybe forget it. I think I’ll just sit on the couch for a year in my fetching grey leggings and wait for Paul and Prue to pop out from behind the test card.