A great all-rounder, a vegan option and a special dessert to enjoy on Christmas Day 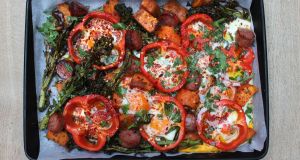 Sheet pan eggs: the ultimate breakfast for a jam-packed house

Can you hear that? The panic? The big day is nearly here and you’re not sure if you’re going to run out of food. The house looks like a real life version of the documentary Doomsday Preppers.

But hold on... you’re not living in the desert. For a lot of people it’s just a quick spin to a shop – which will only be closed for a day. Yes, just one day!

You may have 20 bottles of sherry for trifle, 50kg of sausages for pigs in blankets, 10 turkeys – but still you feel you must do that last run to the supermarket, rolling under the shutter doors, Lara Croft-style, to get that final piece of cranberry Wensleydale.

This is the woman I have become.

I don’t know when or how it actually happened, maybe in 2002. That’s when I married David, a staunch Carlow man who will not budge from the idea that Christmas dinner consists of turkey, ham, cranberry sauce, pigs in blankets and Brussels sprouts. Sometimes I like to suggest alternatives. Rib of beef? Nope! Monkfish and lentils and chorizo? God, no! Bread sauce? What’s that?

I grew up with a very different experience. Santa, or Santy if you prefer, arrived on a jet ski dressed in fur-trimmed red shorts and sun glasses. Every year without fail we got a beach ball and towel, and a bucket and spade. We did throw a few shrimp on the barbie, and if you weren’t wearing factor 50, the only part of you that wouldn’t burn would be the back of your mullet.

We never had bacon that much back in New Zealand in those days, and if we did it was with our English neighbours who used to fry bread and have HP sauce sent to them in the post. It seemed really exotic to us.

My mum was really impressed by all this and took her cue from them to make the most amazing Christmas breakfasts. She would cook bacon, sausages and eggs as well as tomatoes straight from the vine. She also adopted the fried bread phenomenon. Mum displayed this feast in our finest range of Pyrex dishes.

My mother was always a bit of a character, she sold microwaves when they first came out and drove a brown Cortina. Back then she loved to wear shoulder pads and fake fur, Panache perfume and blue eyeshadow. That pretty much sums up Christmas for me – a dash of glamour, something that looks good and that’s quick and easy, so you can spend more time outside of the kitchen where you should be. Together.

This is a great all-rounder to take the stress off Mam, Dad or whoever is trying to feed the family. Baked eggs with Fingal Ferguson’s chopped chorizo is the ultimate breakfast for a jam-packed house.

Method
Preheat the oven to 175C.

In a large bowl, drizzle the oil over the onion, pepper and sweet potato.

Mix the veg stock with the chilli and cumin, sprinkle over the vegetables and toss everything together well to coat.

Tumble the mixture into a high-sided baking tray that has been lined with parchment.

Bake in the oven for 10 minutes, remove and stir.

After that initial blast add the broccoli, chorizo and St Tola and bake for another 10 minutes or until the sweet potatoes are just tender.

Carefully crack your eggs into the oven dish one by one; if you try to get each one into a ring of red pepper it keeps them together nicely.

Dollop spoonfuls of the yoghurt around on top. Season well with salt and pepper.

Bake for a further 10 minutes or until the whites are set and the yolks are still runny.

Scatter over the parsley and serve straight away with a hearty loaf of crusty sourdough and plenty of salty butter.

Method
Preheat the oven to 160C. Trim and clean the mushrooms. Rub them in the Sriracha and bake for 10 minutes so they are partially cooked, then cool. (You can do this the night before.)

Once cooled, take three bowls. Put the flour in the first and oat milk, salt and pepper in the second. Put the panko in the third and mix in the oregano and dill.

Dip the mushrooms in each bowl starting with the flour, then the oat milk, making sure they are fully covered. Finally coat them in panko and set aside.

Heat the oil in a wide frying pan and fry the coated mushrooms until crispy and dark brown in colour.

To make the cashew queso, soak the cashews in water for 24 hours. They should be fat and plump. Pop them into a blender or NutriBullet with the rest of the ingredients and blitz until smooth. Test for seasoning and adjust if required.

The queso will last in the fridge for a week. Serve it on toast, as a dip or on its own with crunchy radicchio or roasted roots.

Method
Whip the cream in a large bowl with an electric mixer until soft peaks form.

Mix the whiskey and vanilla with the muscovado and condensed milk, slowly add to the cream with the mixer running on a low speed until thoroughly combined.

Pour the mixture into a large ice-cream tub or a lined loaf tin.

Freeze for six to eight hours or ideally overnight.

Place two small scoops of the ice cream in a glass, cup or little bowl then pour over the shot of espresso.

Serve with a mince pie.

Irishwoman in Scotland: ‘The pandemic has brought me closer to home’
8