With Dún Laoghaire Christian Institute set to close, members explain what it means to them

One of Ireland’s oldest social clubs, the Dún Laoghaire Christian Institute is closing after 130 years in business. The club was originally set up in 1888 to provide social activities for young protestant men from rural Ireland. Video: Bryan O'Brien 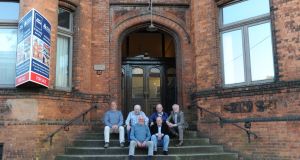 For years after Alan died Eddie struggled to climb the steps. The sudden loss of his beloved son in 2006 left an unfillable void. But Eddie kept coming to his social club, Dún Laoghaire Christian Institute, to be with friends, to quietly make his way through the imposing doors at 43 Upper George’s Street, up the old staircase and into the bar, formerly a billiards rooms and the place where the last 52 members play snooker to wind away the evenings.

Here he was among friends.

In gentle tones Eddie, who worked in customs and excise before retirement, says: “Alan had just come back from touring with his Celtic punk-rock band, Blood or Whiskey, when he had a massive heart attack and died. He was 33. After that I stopped playing music. I just couldn’t bring myself to do it. For four or five years I didn’t pick up an instrument, but then one night I was here and one of the lads was playing the banjo and saw that my eyes lit up when he played. He handed it to me and said, ‘Go on, you’re itching to play,’ and, hesitantly, I took it. I was rusty and made a show of myself, but nobody cared or noticed, because no one was looking for a mistake. Because of this place and the people here I came back to music.”

The large for-sale sign at the entrance to this majestic three-storey purpose-built club means the music won’t play for much longer. After 130 years the social club will be no more.

“I don’t know where I’m going to go now to keep playing music. It was so easy here. There was always great encouragement. It was free and easy,” says Eddie, who has been a member for more than two decades.

Because of a dwindling, and ageing, membership the club has finally reached the end of the road, although its final days were perhaps inevitable when unwise investments were exposed during the economic crash.

A trustee and committee member with a senior role in banking insisted on investing the club’s savings in bank shares.

“Everything went pear-shaped. In 2007 there was €500,000 worth of bank shares there. Last month they were worth €2,500. We lost our back-up. If we’d had that money we could have probably lived on for another 20 years,” says Liam Barnes, the club’s general secretary, who lives on the third floor of the building with his wife, Yvonne.

His two sons, Mark and Eric, spent most of their lives here. For two decades Barnes has done everything possible to keep the club alive, to generate revenue, to negotiate with the council on rates and to attract members. Between 2000 and 2015 things looked bright on the membership front, when there were 200 on the books, a karaoke machine was installed to attract younger members, but ultimately the sands of time fell to the bottom of the hour glass.

And so the 52 remaining members, who range in age from 40 to 91, play a waiting game, knowing that someday soon the lock will be changed on the doors of this building, which was constructed in 1888 and originally known as Kingstown Mens Christian Institute – to cater initially for the Protestant community but which opened its doors to Catholics and women in 1977. Today 30 per cent of the members are women.

Its founder and benefactor, William McComas, of the Grange, in Monkstown, not only stumped up the £4,000 for its construction but also left £10,000 in a trust to ensure the club could ride out any dips in its fortunes over the years. But this was one dip too many. (There’s a search on for the final resting place of William McComas. When the lights go out the members would like to bid farewell to him one last time.)

For Les Beegan, a trustee, the club’s longest-serving member, and a former Dublin City Council painter, the end of the road will spell a complete change of life.

Over a pint in the bar he says: “I’m down here almost every day, working on the bar and helping out with odd jobs. I was here when I was in secondary school. Then I went away, came back and rejoined, so that’s 40 and a bit years. I remember when I was younger sitting and listening to men who’d fought in the World Wars telling us their stories. Some had lost limbs. They were amazing characters – great people. They found peace here.”

And there has been romance. When women joined one in particular caused a ripple, as Liam Barnes explains: “Noel Golden and Hannah met here and are now married. Hannah was the first woman to ever enter a snooker tournament here, and she played me in her first game and beat me. It’s now nearly 40 years later, and I’ve never lived it down.”

The snooker room is dark and timeless. There are no mod cons, and only a framed poster of the original Rat Pack hints at anything remotely contemporary.

“They are well over 100 years old and in perfect condition. Works of art, really,” says Eddie Confrey. “Made by Burroughes & Watts, they were. They used to be based at 43½ Mary Street. The crazy thing is we’re trying to sell them off now but can’t find anyone to take them.”

John, one of the members, pops in with a cue in hand and asks if the few in the bar would be interested in a game of killer. There’s a €30 meat voucher going for the winner.

Liam Barnes is more concerned for the older members than for himself. The asking price for this beautiful but imposing property is €1.5 million, and after debts are paid off any surplus will be paid to the local Church of Ireland, in line with the articles of the trust that established the club.

“You know, some members struggle to get up the stairs now, but they find a way to do it,” says Barnes. “Even during the recent snow, they made their way here. To see it all fall apart now breaks my heart. We have a member whose grandson was murdered out in Tallaght recently and another whose 35-year-old daughter died tragically – they found solace in this place, where they wouldn’t find it if they went to a pub.”

Some fear the old building will be converted into apartments and the memories wiped away. His voice breaking ever so slightly, Les Beegan says: “Ah, look, it’s very sad . . . but I suppose this great place is past its sell by date – even if we are not.”