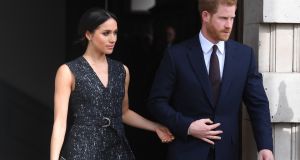 Prince Harry and Meghan Markle will marry on Saturday at St George’s Chapel in Windsor Castle in a ceremony that has sparked huge global media interest. Photograph: Victoria Jones/PA Wire

This weekend’s carefully planned wedding of Britain’s Prince Harry to his fiancée Meghan Markle was mired in confusion on Tuesday after the father of the American actress told a celebrity news website he was no longer coming.

Harry (33), Queen Elizabeth’s grandson and the sixth-in-line to the British throne, and Markle (36) will marry on Saturday at St George’s Chapel in Windsor Castle in a ceremony that has sparked huge global media interest.

Doubts that Thomas Markle Sr (73) would give his daughter away on Saturday followed claims by US celebrity website, TMZ, that he was pulling out amid allegations he co-operated with a Los Angeles based photo agency to stage pictures of himself preparing for the wedding day. He told TMZ he did not want to embarrass his daughter or the royal family. Markle Sr had suffered a heart attack six days ago, TMZ claimed.

Responding to the report, Kensington Palace said: “This is a deeply personal moment for Ms Markle in the days before her wedding. She and Prince Harry ask again for understanding and respect to be extended to Mr Markle in this difficult situation.”

Kensington Palace had announced earlier this month that Markle Sr, a retired television lighting engineer who lives in Mexico, would walk his daughter to the altar at St George’s Chapel in Windsor Castle, where she will marry Prince Harry on Saturday in front of 600 guests and an international television audience of millions.

Her mother, Doria Ragland (61) a social worker and yoga teacher who lives in Los Angeles, is expected to accompany her daughter in the bridal car. Markle was then planning to take her father’s arm on the steps of the chapel.

But TMZ said Markle Sr had “now decided not to go because he doesn’t want to embarrass the royal family or his daughter”.

Samantha Markle, the actress’s half-sister, told the Good Morning Britain TV programme she hoped he would still be there but it depended on his health. “He was really having heart pains and suffered a heart attack,” she said. “It was an unbelievable amount of stress. “I don’t know as of today what his plans are, but there’s a very real concern. I wanted to see him go (to the wedding). I didn’t want him deprived of that. But clearly the priority should be whether or not it’s safe for him to do that.”

The development followed a report in the Mail on Sunday which alleged that Markle Sr had helped stage pictures showing him being measured for his wedding suit, working out with weights in a park, reading a book on British history and looking up reports in an internet cafe about the forthcoming wedding. The newspaper printed photographs which it claimed showed Markle and the photographer entering the cafe together.

TMZ reported that Markle Sr meant no harm to his daughter or the royal family when he allowed the photo agency to take the pictures and that he had not been motivated by money.

The website reported Markle had complained that at times over the past year he had been ambushed by paparazzi, often taking unflattering photos of him and that he had turned down offers for interviews of between $50,000 (€41,918) and $100,000 (€83,837). He thought the staged pictures would recast his public image.

TMZ added that Markle said he had suffered a heart attack six days ago, but checked himself out of the hospital so he could attend the wedding.

Earlier on Monday, Meghan’s half-sister, Samantha, claimed on television that it was her idea that their father stage the photos.

Prince Harry has yet to meet his future father-in-law. Kensington Palace has previously said Markle’s parents would meet senior members of the royal family, including the Queen, in private this week. But it remained unclear on Monday night whether Markle Sr would be flying to London as planned.–Guardian and PA