When my teacher told me Edgar Allan Poe’s people were from Cavan, I wasn’t surprised 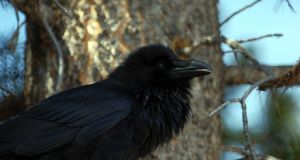 What I didn’t know back then was that images from Poe’s landscape were all functioning as metaphors for my own loneliness. Photograph: iStock

I once worked with a theatre company on an adaptation of The Woman in White, a masterful piece of Gothic romance. I enjoyed the adventure so much that afterwards I wrote a piece for another company, based on the writings of Edgar Allan Poe.

Those adventures in theatre brought me back to my childhood, and teenage years when I was in love with all things goth and Gothic.

Even as an infant I remember being fascinated by Frankenstein, when he first appeared on television one Sunday afternoon. And I adored Dracula; like a girl might adore Black Beauty. I read horror comics under the blankets with a torch at night, my stomach churning to see the blood dripping from Count Dracula’s lips, and the satin and white lace lining his coffin.

I could have kept the light on but the tiny click would have been heard by my mother because she had ears like a bat. There was no sound beyond her. She could hear around corners and she would stand motionless on the landing, listening.

'Are you asleep yet?' she might ask, which I thought was the strangest question. 'Yes,' I always replied

Of course she would have easily seen the light spill from under my bedroom door if it was on, and if I turned it off as she ascended the stairs, she would hear the click.

She stood out there for ages in silence, her fingers on the handle of the bathroom door, as alert as a fox.

“Are you asleep yet?” she might ask, which I thought was the strangest question she ever directed at me; if I was asleep I’d hardly manage to answer her.

“Yes,” I always replied. And she would open the door of my room as if she suspected something, and I would see her shadow with only the corridor light shining on the back of her head.

I would mumble a sleepy “Goodnight, Mam” as if I was already half gone to noddy land, and she would close the door and go away.

That’s why I had the torch. A silver tube with a small red button that flicked off as fast as a vampire might vanish behind the curtains, and back on again when mother was gone so I could return to my Prince in the Darkness.

It’s the poetic force of Dracula that still haunts me; his bloody fangs and the white ivory flesh of his victims are all powerful metaphors, and I wouldn’t be surprised if Hollywood or Netflix were already contemplating a fresh look at vampires in the age of coronavirus.

It was when I finished with the comics of Dracula that I turned to Edgar Allan Poe in books. It’s just as well no psychotherapist got their hands on me at that stage, or they might have been seriously worried about my development.

I was hooked on the soft pornography of death in Poe’s dark stories, and yet it was all available to me as literature without censure. Even the English teacher in secondary school was impressed by my annunciation of the double-barrelled name, when he quizzed his students as to who their favourite authors were.

And when he told me that the great writer’s ancestors came from Cavan I wasn’t at all surprised.

When I ran my eye across the library shelves in Cavan, it wasn’t for Ivanhoe or Robinson Crusoe that I hunted. Because for me Edgar Allan Poe wrote sentences of such astonishing muscularity that I could not imagine anything more beautiful.

The unendurable oppression of the lungs and the stifling fumes from the damp earth that a frail creature experienced in her coffin, the clinging of the death garments to her body and the rigid embrace of the narrow house that was her coffin were far more alluring to me than all the lyrics of Leonard Cohen.

What I didn’t know back then was that the coffin’s interior and other images from Poe’s landscape were all functioning as metaphors for my own loneliness. Being buried alive or entombed forever behind a wall seemed to resonate precisely with my feelings in those grim years of early adolescence.

And now that there is so much disease and dread in human society, and a sense of impermanence is once again sweeping across the Earth, I suspect it will not be long before all my old Gothic friends reappear, on movie screens and on library shelves and in the darkness of the night.

‘Being a man is quite scary’: readers tell us what is hard about being male in 2018
5

What are the best clothes, fabrics to wear to stay cool in the summer heat?
Real news has value SUBSCRIBE