Lives Lost to Covid-19: ‘I don’t think I have ever come across anyone who didn’t like him’ 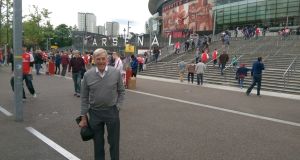 Islington-born professional footballer Dave Bacuzzi moved to Ireland in 1970 after a club career in England with Arsenal, Manchester City and Reading. He was to enjoy remarkable success as player-manager with Cork Hibernians, where he quickly gained a reputation for spotting the potential in others. He later led an amateur Home Farm side to the FAI Cup and had a hand in developing the career of Liverpool and Ireland star Ronnie Whelan.

“When people used to constantly come up to talk to him about his time in football,” recalls his wife Eithne, “I used to wonder how they could remember all of the things they talked to him about. He used to say that he did too.”

The couple met in 1980 while both working for Tara Travel on Dawson Street in Dublin. “He was there part-time while still involved in football,” she says. “Things took off from there romantically. It was all good and never changed.”

She speaks warmly now of the impact he had on their children - Melissa, David and Anne - growing up.  “He was a very easy person to be around, laid back, optimistic and approachable.  He used to encourage them and when Anne got married in Italy and he walked her down the aisle, he considered it a highlight of his life.”

Their own time working in Italy, somehow trying to chaperone a huge number of Irish supporters at the 1990 World Cup, remains one of Eithne’s fondest memories. “We had the most amazing time, such fun. I’ll never forget it. We were minding 800 people . . . can you imagine? It was stressful, the supporters were great away and we lost a few and all of that, but it was great.”

After Ireland came from behind to draw with England in Cagliari, Dave came in for a fair bit of friendly fire from the travelling fans, “but he never had any issues at all with being English in Ireland. He never set himself up as different. I think he felt more Irish than English in the end, but his father had been from Italy and he used to say that he would pull out the Italian card when he needed it.”

The pair eventually set up a travel business of their own and though Eithne moved on to other things, Dave ran it until his retirement in 2009, after which he enjoyed life, despite some slight health issues in the past couple of years, right up until he took ill on March 19th. The following day he was diagnosed with Covid-19 and though he was initially expected to pull though, he passed away on April 21st.

“We were in tatters,” Eithne says. “We were treated so well by St Vincent’s but it was heartbreaking the way it all happened; that’s just the by-product of the way everything is at the moment.” The widespread warmth expressed towards him since has been a huge comfort, she says.

“I don’t think I have ever come across anyone who didn’t like him; I’m sure you could find thousands who didn’t like me,” she says with a laugh. “I was the noisy one but he never tried to stop me being noisy and that was great.

“The chemist locally said to me the other day that he had never realised I was married to a legend. I don’t think I ever did either until he died.”