Róisín Ingle: After seven months of this headwreck, what needs to be done feels harder than ever 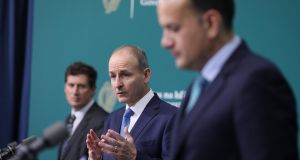 I sat outside a friend’s Dublin city-centre restaurant recently, one of the lucky 15 allowed to dine for an hour and a half in the freezing cold. I nibbled on prawns, my shoulders wrapped in a blanket, and watched as he tried to manage his business in compliance with restrictions. It hasn’t been easy.

“You tell people to leave, their time is up, and they argue back – especially if there’s a good bit of wine on board,” he said, wiping down a table and assiduously counting heads. “They don’t want to go and meanwhile the next people are waiting to sit down to eat and getting annoyed.”

If all that wasn’t stressful enough, he was convinced a woman in a nearby apartment had been responsible for the more frequent than usual visits by gardaí. The police said they’d been getting calls claiming the restaurant had more than 15 people outside. It never did – “it’s not worth the risk” – so the gardaí, when they came to check, never lingered long. But at other nearby restaurants my friend said he often counted 50 people eating their dinner, a blatant disregard for the rules.

“You say nothing; you can only look after your own patch,” he sighed, explaining that it’s all been about trying to make enough money to pay the rent on the place and to pay what few staff he’s been able to keep on.

There was 1980s music blaring from my friend’s restaurant, and people taking shots of tequila and lime, and beyond his place, people were gathered in illicit numbers on benches and on the grass, illuminated by streetlights and iPhone torches, eating dinner from trays they’d bought at the deli counter of a supermarket.

It’s all a bit moot for my friend now anyway. No more outside tables, no more counting heads or worrying about spying, lying neighbours. From midnight on Wednesday we’re at Level 5. Restaurants are back to take-away only, that tiny revenue stream of actual bodies in blankets, eating and drinking on terraces and balconies and outdoor spaces, cut off for the foreseeable future. Time to stock up on toilet roll again. Get back to the banana bread. Hello, Level Déjà Vu.

And yet the rule-breaking crowds outside my friend’s restaurant were enough to make you wonder how much compliance there will be in lockdown 2. After more than seven months of this headwreck, while the majority are playing ball I get the sense that growing numbers have decided to live by their own rules and do what feels right to them rather than obey to the letter what the Government or Nphet are saying.

“How come?” people were asking during the days of Level 3 and a bit. “How come I can meet five friends for dinner but I can’t visit my mother in her garden? How come the schools are still open? How come …?”

Some people feel the restrictions are contradictory in a way that leaves them open to interpretation. Some other people just don’t seem to care about the consequences of their actions like the man who failed to restrict his movements after returning to Ireland from a trip abroad. His decision to ignore his symptoms and the advice to quarantine led to 56 people being infected with coronavirus, including up to 10 households and a sports team.

There’s something in the air, infected droplets obviously, but also a sense as the mornings grow darker and we move into winter that we’ve gone to another level, one that’s not on any Government brochure: Level Whatever You’re Having Yourself.

When we eventually get around to reeling in this poxy year, the voice of a small boy on a recent radio vox pop, outlining in his beautiful Dublin accent why he was outraged at not being able to go trick-or-treating when Halloween comes, might ring like a warning bell:

“I think the Government should step up and sort it out, I feel like they literally don’t know what they’re doing with the country,” he said.

Maybe we’ve hit a Covid wall. When on Sunday an alert on my phone told me Simon Harris was about to do an Instagram live, I went straight there to watch him in his hoodie – he’d been been out for a walk – acknowledging how hard times are for everyone and talking about the toll this is all taking on people’s mental health.

Thank you, we told him in the comments, feeling slightly comforted by the fleeting flurry of likes and love hearts on the screen, reminiscent of that potent brand of early lockdown solidarity.

That cold night eating prawns outside my friend’s restaurant, I heard St Elmo’s Fire for the first time in years and the words of that soaring 1980s tune again put me again in mind of the pandemic.

“Play the game. You know you can’t quit until it’s won. Soldier on. Only you can do what must be done.”

Good advice. Except what needs to be done feels harder than ever now.