Nicholas Leonard obituary: A writer at heart, full of witty puns and wordplay

Leonard’s career ranged from journalism to business, becoming a caption writer of political cartoons at age 78 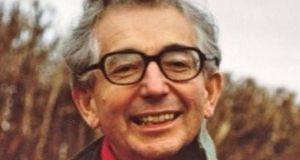 Nicholas Leonard loved being publicity officer for the Arts Guild, because it allowed him to promote his love of music.

At interview, the editor, Alan Montgomery, expressed worry about his young age. Leonard’s concerns were rather different. Aware of the paper’s precarious financial status, he wondered, aloud, if The Irish Times would survive long enough to employ him.

He was witty and kind. Most of his roles in business and journalism came through the contacts he had made

Although he had little experience at the time – having worked for just nine months at the Investors Chronicle, and another five at the Evening Standard, Leonard made a success of his role.

“I took William Davis’s advice,” he said. “Get your byline on the financial pages every day, and do interviews with major business people as often as you can.”

He’d jumped ship, and become the founder editor of Business and Finance for Hugh McLaughlin of the Creation Group when he first met Tony O’Reilly – featuring him in a cover story. A fortuitous encounter, this led to friendship and, ultimately, the formation of Fitzwilliam Securities.

Born in London in 1939, Leonard lived mostly in Dublin until 1954, when the family settled at Summerhill, in Killiney. After attending Ampleforth College in Yorkshire, he won a scholarship to study French and Spanish at St John’s College, Oxford University. Throwing himself into every cultural event, he edited the student magazine, Cherwell.

During his time with Business and Finance, Leonard kept himself frenetically busy. His day job involved producing a 32-page weekly magazine with a staff of five; yet he found time for several other journalistic endeavours, including several newspaper columns, and TV and radio work for RTÉ. No surprise that when, in 1964, he married Kirsty Mackenzie, who he had first met during his Oxford days, the two of them managed to squeeze in only a two-day honeymoon.

Six years later, in 1970, Leonard changed careers, and became a business and finance executive with the Allied Irish Investment Bank, but he quickly became disillusioned with the bank’s emphasis on large lending to safe propositions.

“So in April, I wrote to Tony O’Reilly, asking whether he would be interested in helping me launch a venture capital investment trust to finance smaller expanding companies.”

O’Reilly suggested that they take Vincent Ferguson on board; the two had been colleagues at Irish Sugar and Erin foods. They met at O’Reilly’s house in Delgany, and Fitzwilliam Securities was born. They acquired Crowe Wilson, Gouldings, Dockrells and other diverse companies, and became the publicly quoted company, Fitzwilton.

This rapid career arc was testament to Leonard’s quick and versatile brain. Everything was done at breakneck speed. He moved to London to promote the investment interests of Fitzwilton – sometimes successfully and sometimes not. He also joined the board of Independent Newspapers.

Leonard was always a writer at heart, full of witty puns and wordplay, and, in 1989, he moved back into journalism and broadcasting. Resigning from his three public company directorships, he started writing a political column for the Sunday Independent. The Westminster Review ran in Independent Newspapers from 1989 until 2012.

Interested, it seemed, in everything and everyone – he would offer advice and help if needed – he was also a private man

He also worked at the London News radio station, LBC, and, in 1996, he presented hourly financial slots for the satellite TV channel, CNBC.

Leonard was a man of contrasts. He was supremely confident. When Douglas Gageby had tried to persuade the 24-year-old to stay at The Irish Times, he replied jokingly that the only job that would interest him was the editorship. Yet he was modest – talking of his failures as well as his success.

He was witty and kind. Most of his roles in business and journalism came through the contacts he had made. Interested, it seemed, in everything and everyone – he would offer advice and help if needed – he was also a private man.

He never fully retired. After his move to Scotland in 2003, he involved himself with the local community in Linlithgow. He relished being publicity officer for the Arts Guild, because it allowed him to promote his love of music. He also spearheaded a successful campaign objecting to plans for an out-of-town hypermarket which he could see were already ruining high streets across Britain.

In 2017, at the age of 78, Leonard launched himself into a new career – as a caption writer of political cartoons. He found artist Helen Cochrane and, before long, they had a fruitful collaboration, being commissioned to produce a weekly cartoon for the Financial Times.

He died in hospital after a short illness and is succeeded by his wife, Kirsty, his daughters, Jennifer and Antonia, and four grandchildren.