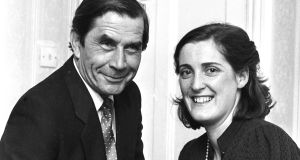 Tom O’Donnell was a Fine Gael TD for Limerick who served as a cabinet minister in Liam Cosgrave’s government from 1973 to 1977 and was elected to the European Parliament in the first direct elections to that body in 1979.

He was widely regarded as having performed successfully as minister for the gaeltacht from 1973 to 1977 while several members of that government became embroiled in damaging controversy.

He had a distinctive voice that resulted from a hearing difficulty with which he coped from an early age. That ailment was believed to be at the root of a misunderstanding which inadvertently created a political headache for the government in 1974.

Following the sudden death of president Erskine Childers in November, 1974, a little over a year after he had been elected, the Fine Gael-Labour government and the Fianna Fáil opposition tried to find an agreed successor in order to avoid another election.

The late president’s widow Rita Childers was top of the list and Cosgrave and the Fianna Fáil leader Jack Lynch met and agreed to her nomination. Cosgrave told his cabinet about the agreement but emphasised that it was absolutely confidential because the proposal must, for Lynch’s own sake, appear to have come from him.

There was considerable media speculation about an agreed candidate and Skibbereen urban district council passed a resolution asking the government to invite Mrs Childers to be the next president.

The Limerick correspondent of the Irish Independent Noel Smith approached O’Donnell and asked him to comment on the Skibbereen resolution. “Tom couldn’t hear properly, because he wouldn’t wear a hearing aid. He thought the story was out and gave Noel the whole thing,” recalled his cabinet colleague, the late Peter Barry, a number of years after the event.

Smith wrote a front page story for the Sunday Independent, which appeared under the headline “Mrs Childers for President” quoting Government sources as saying she could have the presidency if she wanted it.

There was consternation in Fianna Fáil. “Lynch went up like a rocket. He thought Cosgrave had broken confidentiality. That meant Mrs Childers was out and we ended up with Cearbhall [Ó Dálaigh],” said Barry. That decision was to have fateful consequences for the Cosgrave government.

Tom O’Donnell was born at Bulgaden, Co Limerick, and was educated at Cappamore national school before going on to Crescent College, St Patrick’s College Thurles, and University College Dublin, where he graduated with a Bachelor of Arts degree.

After graduation he worked as a secondary teacher in Dublin for a time before returning to Limerick. He became involved with Muintir na Tíre, a vibrant rural organisation founded by Canon Hayes, and worked for three years as editor of Landmark, the journal of the organisation.

His uncle Richard O’Connell had been a Cumann na nGaedheal TD from 1924 to 1932 and given his interest in public affairs it was no surprise when O’Donnell became an active member of Fine Gael. He ran for the Dáil in the Limerick East constituency in 1961 and was elected at his first attempt, unseating the sitting Fine Gael TD, John Carew.

He supported the Just Society initiative of Declan Costello in 1964 and was brought on to the party front bench by Cosgrave in 1969 as spokesman on transport and power.

While he was a supporter of the Just Society programme he remained aloof from the Dublin middle-class liberal wing of Fine Gael and supported Cosgrave as party leader when Garret FitzGerald and others were plotting to replace him in 1972.

When the Fine Gael-Labour coalition took office in March 1973, Cosgrave appointed him to the cabinet as minister for the Gaeltacht and he remained in that post for the lifetime of the government.

He held his seat in 1977 and was appointed frontbench spokesman on telecommunications by the new leader FitzGerald. He contested the first European elections in 1979 as a candidate in the Munster constituency and was comfortably elected.

He was elected to Europe again in 1984 and during his 10 years in the parliament he was spokesman on regional policy for the European People’s Party.

He was also returned as a TD in the three Dáil elections in 1981/1982 but was disappointed not to be asked by FitzGerald to join the cabinet in either of the two Fine Gel-led governments. He lost his Dáil seat in 1987 and did not contest the European election in 1989.

He was honoured by Limerick City Council with a civic reception and a special presentation in 2005 to mark half a century of political and voluntary services to the people of the city and county.

In 1984, he married Helen O’Connor from Sligo, who had been honorary national secretary of Fine Gael, and they had one son, Thomas O’Donnell jnr who was born on New Year’s Eve 1996. Both survive him.