Dominic West: ‘Our marriage is strong’ – but has he made a bad situation worse? 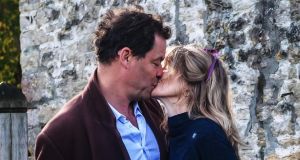 Actor Dominic West and wife Catherine FitzGerald in a public display of affection outside their home in the Cotswolds after West was seen kissing actor Lily James in Rome. Photograph: GlosPics/MEGA/GC Images

There’s a certain tabloid trope featuring the maladaptive, cheating politician and his trod-upon, long-suffering wife that was popular a decade or two ago. Picture the tableau: she, immaculate in a twinset and pearls, pushing strands of her bob out of her bloodshot eyes, a wet Kleenex secreted into her sleeve. He: straight-backed and defiant, with a solid arm around his shivering spouse, assuring a bank of assembled photographers in no uncertain terms that their marriage is rock solid, and there’s absolutely nothing at all to see here, thanks. Move along now, and try not to scratch the mid-life crisis Ferrari on your way out.

Anyway, I thought of the pitiable scene afresh when I saw photos of actor Dominic West and his wife Catherine FitzGerald this morning. In case you’ve not been keeping an eye on the unfurling of this particular story, here’s a quick recap: on Monday, photos of Dominic West and his current co-star Lily James having a boozy lunch surfaced. There was, to lean heavily on tabloid parlance, “canoodling”, with the pair looking “besotted” with each other, and “not caring who saw them”. Next, the two took to the streets of Rome on an e-scooter, and looked particularly non-colleague-y as they took selfies in the city.

Back home in Wiltshire, West’s wife – the couple also own Glin Castle in Limerick – was described by “friends” as “heartbroken, shocked, and devastated”.

If that’s the case, she is probably a better actor than her husband is.

FitzGerald certainly looked like no-one’s idea of a trod-upon wife; in fact, she offered the press assembled outside her Wilshire home a rather “I’m all right, Jack” nod to camera. After a quick Solidarity Snog (not to mention an ill-advised smug gurn on West’s part towards the lens), the couple then distributed a hand-written note that bore the words: “Our marriage is strong and we’re very much still together. Thank you’.

Now, I’m no expert in celebrity PR, but I’m willing to wager that there’s not a publicist in the country who would advise a couple in crisis to resort to this performative nonsense. The moment has the unseemly smack of either a PR stunt, or a couple who Doth Protest Too Much with the help of an embarrassingly retrograde charade. It didn’t work for David and Victoria Beckham back in the Noughties (you may remember, in the wake of the post-Rebecca Loos allegations, the Beckhams were photographed looking especially, aggressively amorous), and in world where showbiz fans are more literate than ever before, it’s not going to work now.

The problem with the “OUR MARRIAGE IS FINE, LOOK” protestation is that the louder the celebrity couple says it, the greater the likelihood that things are, maritally speaking, in dire straits. In 2006, Britney Spears pursued libel action against outlets in Ireland who insinuated that her marriage to Kevin Federline was hitting difficulties. The National Enquirer (UK edition) was forced to apologise to the star in June of that year, with their retraction reading: “now accept that their marriage is not over and they are not getting divorced. These allegations are untrue and we now accept Britney’s position that the statements are without foundation. We apologise for any distress caused.” Spoiler alert: the marriage was over by November.

It’s not like there hasn’t been a wealth of precedent that might indicate to the West-FitzGeralds that this sort of thing was an ill-advised move, but still. The problem now is that their demonstrative show of solidarity has made a bad situation even worse. Had West just weathered the scandal in a good old-fashioned way (read: ignored it), he might have gotten out in much better shape. Instead, he made himself a central player in his own pantomime, played to the peanut gallery, and roped his poor wife in to boot. It is the publicity equivalent of dousing oneself in petrol and hoping that it dries into your clothes before any real damage can be caused. The problem is that showbiz followers, especially in the current climate, are a breed in dire need of escapism and distraction.

Sorry, Dominic: your doorstep Public Display of Affection could not have happened at a worse possible time.