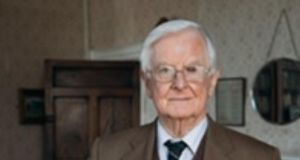 Leslie Matson is among that select group of authors who have immortalised in literature the rich culture of the Blasket Islands, along with others such as Robin Flower, Carl Marstrander, Peig Sayers, Tomás Ó Criomhthain and Muiris Ó Súilleabháin.

He was initially drawn to Corca Dhuibhne in 1954 to improve his Irish so he could register as a teacher, staying with the legendary “Kruger” Kavanagh.

Never a man to do things by half, he embedded himself in the community as well as in the culture of the west Kerry Gaeltacht.

His social research on the 125 former inhabitants of the Blasket Islands stands as a valuable resource to scholars for posterity.

He befriended Mártan Ó Catháin, a nephew of Máire “Méiní” Dunleavy (1876-1967) who had been the Blasket midwife for 36 years.

Méiní, not accustomed to the name Leslie, hilariously called him “Italy” and that was how local people greeted him, “Conas atá Italy inniu?”.

Encouraged by Mícheál de Mórdha, Bainisteoir Ionad an Bhlaoscaid, he wrote Méiní, the Blasket Nurse, which was published by Mercier Press in February 1996.

Apart from his social research, he was a renowned linguist, teacher, chorister and a much loved family man. He enjoyed speaking Irish, French, German and Russian, and was widely read in English and French, quoting the classics from memory.

From 1977 he spent six years as headmaster of Sligo Grammar School before teaching in Millstreet Community School. He retired at 65 and returned to live in Waterford where he continued his work on the Blaskets and on the archives of Newtown School.

In 1961 he married Joan Powell, whom he had met on the staff of Villiers School and they lived in Waterford. They looked after many of the Newtown pupils in their home as the school was short of boarding space. In 1964 Joan and Leslie memorably took 20 pupils from Newtown School on a cycling trip from Waterford to Paris.

Many of his pupils kept in touch with him. As a teacher, he epitomised the enjoyment of learning, the camaraderie of sport and satisfaction of work well done. Learning a language required learning the culture as well.

Benjamin Leslie Matson was born on January 6th, 1930 and grew up in Cork, joining the choir of St Fin Barre’s Cathedral at the age of six. This began a life-long love of choral and classical music, which culminated in his appointment as Lay Vicar Choral at Christ Church, Cathedral, Waterford. He was a member of the Waterford Music Club for 60 years.

He was educated at Mountjoy School, Dublin as a boarder, and attended Trinity College Dublin where he attained a MLitt and MA. He also studied in Paris and later was sent to La Rochelle, with 20 other teachers, by the Irish Government as they were introducing oral French into the State examinations.

He is descended from the Matsons of Göteberg, a Swedish sea-faring family which worked the fast clipper ships to Australia. Leslie’s great great grandfather sailed into Cork in 1810. There he met and married a local woman and from then on worked out of Cork. His captain’s logbook is a family heirloom. Leslie’s grave now overlooks the sea at St Andrew’s Church, Dunmore East.

He died on March 12th, 2020 and is survived by his wife, Joan, daughters, Kristin and Sheila, sons-in-law and four grandchildren, Ben, Allison, Amine and Ines. A memorial service will be held once the threat of Covid-19 has passed.

The patriotic cellist who refused to play Rule, Britannia!
8