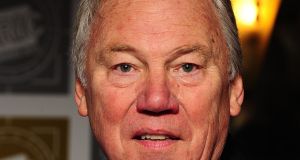 File photograph dated March 2013 of former BBC and ITN newsreader Peter Sissons, who has died at the age of 77. Photograph: Ian West/PA Wire

Of the many news bulletins Peter Sissons read over a 30-year career with ITN, Channel 4 and the BBC, the one he will probably be remembered for is the Easter Saturday broadcast in 2002 when he told the nation that the Queen Mother had died aged 101.

The programme showed Sissons at his best: able to react immediately, live on air, to changing news. The fact that he did so while wearing a burgundy-coloured tie instead of a black one, however, produced a furore in the tabloid press, which used the trivial issue of the supposed insensitivity of his neckwear to indulge its traditional sport of berating the corporation.

The veteran newsreader, who has died aged 77, was scarcely to blame, though the BBC allowed him to shoulder most of the responsibility. “Their first reaction was to land their presenter in it,” he said bitterly. The news had broken only a few minutes before the bulletin was due to air – an earlier message from the corporation’s royal correspondent on the issue had not been passed on – and he had been told by a producer to “skip the black . . . she had to go some time”.

It irked him that his sensitive live interview during the broadcast with the Queen Mother’s niece Lady Margaret Rhodes, who had been present at the death two hours earlier – a fact he only learned about as they spoke – got lost in the row.

A former colleague at Channel 4 News, the Guardian journalist Anne Perkins, recalled: “He was absolutely professional. We would often go into the studio not knowing who the main interviewee was, or news would break while we were live on air, and I never saw him flummoxed. He had a capacity to live on his wits and communicate directly with the viewer. On the programme after the Brighton bomb in 1984, I was handing him handwritten notes and he read them, never fluffing.”

On the day of Princess Diana’s death in 1997, Sissons was on air for more than 10 hours, reacting to the story and conducting live interviews. “I made up the editorial policy as I went along,” he said later. “I ignored the guidance which was that it would be inappropriate to ask awkward questions rather than just reflect grief and shock.” He was understandably annoyed by BBC executives’ subsequent self-congratulatory awayday gathering to discuss the coverage, to which editorial staff were not invited.

Born in Liverpool, Peter was the son of George Sissons, a merchant navy officer, and his wife, Elsie (née Evans), who worked in a department store while her husband was at sea during the second World War, while bringing up four boys. Peter was educated at Dovedale primary school, where the future Beatle John Lennon and comedian Jimmy Tarbuck were fellow pupils, and at the Liverpool Institute high school alongside Paul McCartney and George Harrison, leaving in 1961.

He then went to University College Oxford, where he obtained a degree in philosophy, politics and economics and had his first journalistic experience, writing soccer reports for Cherwell, the student newspaper. That was not enough to get him a job on the Liverpool Post and Echo, but it did win him a place on the ITN graduate trainee scheme in 1964.

Starting as a bulletin subeditor, he became a general reporter in 1967, where his career and indeed his life were nearly cut short during the Nigerian civil war, when he was shot through both legs. The incident shaved his femoral artery and left him in lasting pain thereafter.

Returning to Britain, Sissons became ITN’s industrial editor during the union militancy of the 1970s and, from 1978, a news presenter on ITN’s News at One bulletin. Following the chaotic launch of Channel 4 News in 1982, with its experimental range of presenters, he was employed to restore some order and led the evening bulletin five nights a week for the next seven years.

In 1989 Sissons was poached from ITN by the BBC to present the Six O’Clock News, being warned as he did so by David Nicholas, ITN’s editor, that the corporation was only doing it to harm its rival. The lure was that he would chair Question Time in succession to Robin Day, which he did for four years, a move that was not regarded as a success.

But he also presided in turn over the BBC’s Nine O’Clock News, and then its transmogrification to Ten O’Clock in 2000. Told in 2003 that the corporation was seeking younger presenters, he spent the final six years of his career presenting bulletins for BBC News 24.

Frustration with the BBC

In later years, Sissons would become frustrated by the BBC’s management and bureaucracy, and after his retirement railed against its editorial standards to sympathetic conservative newspapers.

“There’s this belief that there’s this magic lot of young people who will watch more avidly if you put younger presenters up front,” he told the Sunday Times. “Never believe you can’t go out of fashion.”

In 2013 he wrote in the Sunday Telegraph: “The BBC today for all its high salaries is woefully short of great managerial and editorial talent, the sort of leadership you would follow over the top or into the jungle.” He left the BBC in 2009 “without a pang of regret”, as he told the Mail on Sunday.

A lifelong supporter of Liverpool FC, Sissons was a member of the Hillsborough disaster independent panel: “It was the most worthwhile thing I have done because its work corrected such a mammoth injustice,” he said. He also lectured on Saga cruise ship holidays and published his memoirs, When One Door Closes, in 2011.

He married Sylvia Bennett, whom he had met at a Liverpool youth club, in 1965. The couple had two sons, Jonathan and Michael, and a daughter, Kate. Sylvia and his children survive him. – Guardian