Lives lost to Covid-19: O’Carroll was deeply connected to his Kerry roots despite living in UK for nearly four decades 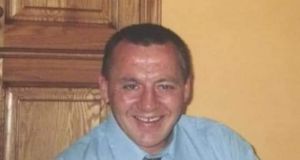 Joe O’Carroll was a happy-go-lucky, gentle soul who was deeply connected to his hometown of Listowel and Kerry roots despite living abroad for nearly four decades.

Born on October 1st, 1962, Joe was one of 10 children who grew up on a farm in the townland of Tullamore. His sister Mairéad, who was one year older, recalls the happy years her brother and siblings spent growing up in rural Kerry.

“Life on the farm was mad but they were the happiest times of our lives. Joe was a very happy-go-lucky chap who loved the outdoors and machinery. But like so many others, he went abroad to look for work in construction.”

Joe moved to London aged 19 where he started working on a cousin’s construction site. He would continue to drive machinery on sites for the rest of his life and returned home to visit family in Listowel twice a year.

“He loved to go to the Listowel races and always came back at Christmas. It was such a joy for my mother to see him coming through the door, she loved him coming back.”

Joe loved Irish music, particularly traditional Irish songs, and never lost his Kerry accent. “It was kind of like he never left home. He spent all those years in London but his Kerry roots were very important to him.”

Joe worked long hours in construction and never missed a day’s work. “He was happy to get up early in the morning and work hard all day and then meet friends at the weekend,” remembers Mairéad. “He had a huge number of friends and was very sociable. He loved hanging out with all nationalities, he got on with everyone.

“He had total generosity of spirit with his time and money and he’d light up a room. He was always smiling.”

On March 27th, Mairéad called her brother and discovered he was feeling unwell with a suspected tummy bug. She could hear his laboured breathing on the phone and urged her brother to call the emergency services. Joe was brought by ambulance to the Royal Free Hospital and spoke to his sister by phone on the 28th to reassure her that he was feeling okay.

However, early on March 29th he was transferred to ICU. His family was contacted on April 11th and told his condition had deteriorated and the priest had been called. Joe died on Monday, April 13th aged 57.

“It was devastating, right up until the day he died we never gave up hope. He hadn’t been ill before that, he was a very healthy man all his life.”

On May 6th, Joe was cremated at Kensal Green in West London. The hearse carrying his body to the crematorium was followed by a JCB draped with the Kerry colours. “All his friends lined the route and the JCB drove behind all the way through the streets of London. It was such a beautiful tribute. He had so many friends, that’s the measure of the person he was.”

Joe’s ashes were sent back to Ireland and he was buried with his father and sister on June 13th in Listowel. “It was deeply upsetting but it gave us some comfort that he was going to join his father. Joe was a beautiful, gentle soul who was dearly loved by family and friends alike.”