Catholic Schools Partnership founder was ‘a builder of community, a reconciler’ 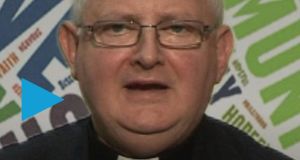 Msgr James Cassin “created unity” and was “a wonderful person in so many ways”, Bishop of Ossory Dermot Farrell said at his funeral Mass.

It is perhaps significant that following his death at St Luke’s Hospital, Kilkenny, on June 5th, what people immediately recalled about Msgr Jim Cassin was his warm, understated personality rather than what has been accurately described as his “outstanding contribution” to Catholic education in Ireland.

This was reflected at his funeral Mass where Bishop of Ossory Dermot Farrell remembered him as “a wonderful person in so many ways. He was a good pianist. He combined a good intellect with great humility and benevolence, a way with people and good sense of humour. He created unity; he was a builder of community around himself, a reconciler.”

He also had a “zest for life and a great capacity for enjoying things – conversations, meals, films, books. An excellent and loyal friend, who loved to laugh and to make others laugh; a man of the Gospel. It is a blessing to have known him,” Bishop Farrell said.

There is little doubt that these personal qualities helped greatly in Msgr Cassin’s relationship with State officials during what could be strained times when he was secretary of the Catholic Bishops’ Commission for Education from 2002 until 2016.

In a tribute, following their summer meeting in June, the Catholic bishops, through education spokesman Bishop of Galway Brendan Kelly, recalled how this was “a period of notable change, north and south, involving the creation of new trustee bodies for Catholic secondary schools, and new models of patronage at primary level in the Republic.

“To this end, Jim led the effort to bring about greater cohesion and vision for the future of Catholic schools through the establishment of the Catholic Schools Partnership. ”

Bishop Kelly said that “running in parallel with this progress, as a trusted interlocutor, Jim forged constructive relationships with key State officials and with other education patrons as he worked to maintain a choice for parents – within a rapidly growing and increasingly diverse environment – who desired a Catholic ethos for the education of their children.”

A Kilkenny man, Msgr Jim Cassin was born at Coolroe near Thomastown in September 1947 and attended St Kieran’s College in Kilkenny before studying for the priesthood at the Irish College in Rome from 1966. Ordained in 1972, he spent a further year studying in Rome before serving at Hartlepool in England for two years.

In 1975 he returned to St Kieran’s College where he spent 29 years as a teacher and nine as president. From 2000 to 2003 he was president of the Joint Managerial Body/Association of Management of Catholic Secondary Schools, representing more than 400 voluntary secondary schools in Ireland.

From 2002, based in Maynooth as secretary to the Bishops’ Commission for Education, he helped emphasise the right of parents to have their children educated according to their convictions, and helped prepare Vision 08. It focused on the church’s contribution to education in Ireland and outlined what was unique about Catholic education.

He also helped set up the Catholic Schools Partnership and supported the development of community schools and designated community colleges while encouraging full participation of Catholic partners in these schools.

He represented Ireland at the European Committee for Catholic Education and, through it, helped broaden an understanding of Catholic education in Ireland itself.

As Bishop Farrell said at his funeral, “Jim was passionate about education. He did not have a superficial and siloed perceptions of education; rather, he had a good grasp of education in all its dimensions: primary, secondary and third level.”

Msgr Cassin is survived by his brother Paddy.