Lives Lost to Covid-19: Glamorous and elegant woman ‘who was a very good mother’ 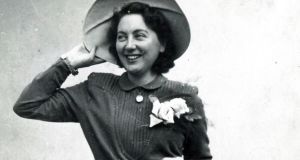 Marjorie Ryan Harvey (99) treasured the autograph book she kept from when she worked as a doctor’s receptionist at Shannon Airport. In the 1940s and 1950s, plenty of movie stars passed through.

“At that time, you had to give them inoculation and she had this brilliant book of all these famous people who passed through – John Wayne, Humphrey Bogart – there were loads of stars in it. She absolutely loved the book,” says Marjorie’s daughter Ita.

Born on Ballymorris Stud Farm in Cratloe, Co Clare, Marjorie met her late husband, Frank, while he worked at Shannon Airport. They married on September 29th, 1951.

They later relocated to Dublin, moving through Frank’s job with fuel company Esso. They settled in Granville Park, Foxrock, and had four children and eventually eight grandchildren.

Even though they worked at an airport, they did not fly until their later years when they went on a pilgrimage to Lourdes.

Ita describes her mother as a “forward thinker”. She was in the Business and Professional Women’s Association in Dún Laoghaire along with Mary Robinson, later to become president of Ireland, and was the group’s president at one stage.

Marjorie died in her 100th year from Covid-19 in Larchfield Park Nursing Home in Naas, Co Kildare, on April 8th. There is a photograph of her blowing out the candles on her 99th birthday cake in the nursing home at the end of January. Her face is lit up, with a friend next to her looking on.

She was buried in a plot in Shanganagh Cemetery near Bray that she and her husband had picked out 40 years earlier. The couple liked the plot because they could hear the sea from there.

On the day she was buried, her family brought daffodils, including some from her home in Cratloe, because of her love of the famous William Wordsworth poem, which was read by her nephew in a brief ceremony.

“She was a very good mother and a great woman. She was very glamorous and elegant. She used to always say that you dressed for public and you never let yourself down,” says Ita. “She was like a movie star.”