‘People loved my coronavirus masks. I felt I was contributing’

New to the Parish: Aziz Mohiuddin arrived in 2018 from Pakistan via South Africa 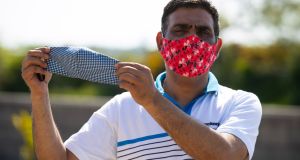 When Aziz Mohiuddin arrived in Ireland in 2018 he hoped to find work quickly. A friend already living in the country had assured him there were lots of jobs available and that with his skills, he would find work without delay. In reality, accessing employment without the necessary paperwork was very challenging.

A skilled tailor, Mohiuddin lived in South Africa for more than a decade before he moved to Ireland. He was born and grew up in the city of Jhelum in Pakistan but left his home country in the early 2000s seeking opportunities abroad.

“At that time everyone in my town was looking for a better life. There was no future as a tailor where I lived so I went to South Africa with friends.”

Mohiuddin found work in an Indian-run clothing store where he did alterations on saris and formal dresses. Having never travelled abroad before, he only spoke Urdu and struggled to learn English in his new home.

“It was the first time in my life flying to another country. I knew nothing about South Africa but when I got there I realised there were many difficulties. The lifestyle is completely different and it felt quite unsafe. If you walk in the streets in the evening people might rob you.”

After a few years in the country, Mohiuddin opened his own tailoring business. However, he says his shop was robbed on numerous occasions and as a result, he struggled to make money.

Mohiuddin found that Indian, Pakistani, Bangladeshi and Senegalese migrants were increasingly the targets of xenophobic attacks. Recent reports from South Africa reveal attacks on foreigners, including migrants from neighbouring African countries, continues to be a problem in the country.

“At a certain point you don’t care about the money; we were more scared they would shoot us. You could lose your life. You can get another business and earn money again but you only get one chance at life,” he says.

“That’s why I left, it was too unsafe. I came to Ireland by myself. I had read it was a safer country and knew people who had travelled here from South Africa.”

On the advice of his friend, Mohiuddin did not initially apply for asylum when he arrived in Ireland in July 2018. Instead he tried to find work as an undocumented migrant. “I lived with friends for that year but could not find a job so helped cleaning friends’ houses. I thought at first I could live here illegally but then I realised it wasn’t a good thing. Nobody advised me on how to apply for asylum but it was on my mind.”

After about a year in Ireland, Mohiuddin applied for international protection and was sent to an emergency accommodation centre in Rosslare Harbour. On March 18th, just days after the country went into lockdown with schools and colleges closing, Mohiuddin was transferred to the new Rosslare asylum accommodation centre at the former Rosslare Port Lodge hotel.

The centre, which has capacity for about 100 people, offers independent living facilities in line with the new standards for direct provision being rolled out across the country. These include access to cooking facilities and an onsite food hall where residents can buy groceries through a points system.

Mohiuddin received his work permit a few weeks before the coronavirus outbreak but was unable to find employment because of the lockdown restrictions. Eager to keep busy and contribute in some way during the pandemic, he approached the centre’s general manger Paul Walsh for advice.

“When he told me he was a tailor we very quickly got two sewing machines donated to the centre,” says Walsh. “That’s where the idea came from to make masks. We were trying to encourage residents to keep active during Covid and tell us about their skills.”

Maybe I’ve been lucky and we have good people here. I’ve read about the problems in other centres but I’ve never seen any problems here. They look out for us

Mohiuddin immediately started sewing masks using material donated to the centre which he then, in turn, donated to the local SuperValu to be distributed to customers for free. “People reacted really well to the masks; they loved my work and gave me material for more masks. I was happy because people appreciated what I was doing. I felt like I was contributing to the town.”

Mohiuddin is able to make 80-100 masks per day and can produce about 45 masks an hour. Parents are now dropping in material with cartoon prints with requests for children’s masks while others started donating elastic when a local radio programme mentioned Mohiuddin was struggling to access certain materials for the project.

Despite widespread complaints about the management and condition of direct provision centres across Ireland, Mohiuddin, who is one of the 7,527 people currently living in accommodation for asylum seekers, says the independent living set-up in the new Rosslare accommodation centre works well.

“People complain about pre-made food and we also had this problem before we came here, but in this centre they give you the opportunity to cook for yourself and clean your room yourself. Sometimes we have to compromise; we can’t cook the same food for all the people from so many different countries, but otherwise we are happy here.

“Maybe I’ve been lucky and we have good people here. I’ve read about the problems in other centres but I’ve never seen any problems here. They look out for us.”

Earlier this month Mohiuddin suffered a health scare and had to spend time in hospital. He admits he was nervous about contracting the coronavirus but says hospital staff were extremely careful and used personal protective equipment at all times. He was also pleasantly surprised when the nurses on his ward said they recognised him from an RTÉ report on his mask making.

“They told me they appreciated the work I was doing, that made me feel good. There were very good people working in that hospital. I’m very grateful to the doctors and nurses; they saved my life. And the centre manager Paul, he’s helped me a lot and got me to hospital.”

Mohiuddin is already back producing dozens of masks each day. His hopes to open his own tailoring business once he has secured refugee status in Ireland. “I feel better when I’m making clothes and working as a tailor. I hope in the future I can settle here.”

Are you a non-lying cheat or just radically dishonest?
7

What sold for about €355k in Chapelizod, D9, Blessington and Stoneybatter
8