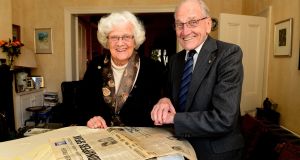 Tiede Herrema with his wife Elizabeth on a visit to Ireland in 2015. Photograph: Cyril Byrne

Tiede Herrema passed away in Arnhem, The Netherlands, on April 24th, having just entered his 100th year. Elizabeth, his beloved wife of 72 years, predeceased him, aged 94, on April 19th.

Many who knew them were perhaps not surprised, that having shared such long and remarkable lives, they would leave the world within days of each other.

In October 1975, living with their family in Limerick, where he headed the AKZO steel cable plant at Annacotty, they found themselves at the centre of a life-or-death drama that endured over five tortuous and dramatic weeks. It ended with the Herremas securing a unique place in the admiration and the affection of the Irish people for their courage, tenacity and generosity of spirit.

The Dutch businessman, then 54, was kidnapped at gunpoint as he drove to work on October 3rd, by a splinter-group of IRA activists.

In exchange for his life, they demanded the release of key IRA prisoners from Portlaoise Prison, a cash ransom and safe passage out of the country. Herrema was held in terrible conditions for almost three weeks in a number of locations while the security services scoured the country.

He was eventually located, with his captors, in a semi-detached house in a Monasterevin, Co Kildare, housing estate. The ensuing siege there lasted 18 days, ending without serious injury, when the kidnappers surrendered.

The Fine Gael-Labour coalition government refused to meet the kidnappers’ demands, fearful of risking the country’s fragile reputation as a place where foreign investment and industry could safely operate. Two years previously, German businessman Thomas Niedermayer had been kidnapped and murdered in similar circumstances in Belfast. Across Europe, in Germany, Italy and elsewhere, kidnappings by terrorists had ended in bloodshed. But in a televised interview, Elizabeth Herrema, while pleading for her husband’s release, stood firmly behind the government’s refusal to meet the kidnappers’ demands. It was an act that marked her out as a woman of singular bravery and moral character.

In the aftermath of the siege, Tiede and Elizabeth Herrema became hero-figures not just in Ireland but also abroad. The strength of character that enabled them to cope with their ordeal, their quiet honesty and openness, their good humour, their forgiveness and their evident affection for Ireland, endeared them to all. They were proud of being awarded honorary Irish citizenship and over the decades returned frequently to Ireland.

Tiede Herrema had a quietly understated but powerful persona. It was arguably his greatest asset in the psychological challenges of his captivity.

He was born in 1921 near Utrecht. His father was a construction worker, his mother a cleaner in a local dairy. They separated when Tiede was 10 and money was scarce. But his mother supported him through college to qualify in mechanical engineering. Later he secured his doctorate in industrial psychology. His career plan to become a naval officer was derailed by the outbreak of the second World War.

He became active in the Dutch resistance to the Nazi occupation but this was a matter he never discussed.

Taken to a forced labour camp in Poland, he was liberated by the Russians and walked home to Holland.

After the war he resumed his career, including a spell with the Dutch railway company, before joining the AKZO-Nobel multinational.

Elizabeth was also born in Utrecht, where her father was a teacher and her mother a housewife. Elizabeth’s ambition of studying medicine was thwarted by a requirement that medical students swear allegiance to the Nazi occupation, which, typically, she refused to do.

She and Tiede were married in 1948 and are survived by their four sons, Jelle, Sjoerd, Idse and Harm.

Later, Elizabeth qualified as a physiotherapist. She was active in local politics and served on Arnhem city council.

The Herremas returned to the Netherlands after the kidnap and siege, with Tiede appointed as HR director at AKZO.

After retirement, aged 62, he worked on a number of consultancy projects and filled a succession of public service roles, including chairman of the Dutch Red Cross.

He was awarded the Order of Orange-Nassau by Queen Juliana in 1977.

For as long as their health permitted, they travelled regularly to Dublin, Limerick and elsewhere. They maintained and built a strong circle of Irish friends, many in cultural and artistic circles but also among former ministers and public servants from the 1970s. Both were avid golfers and continued to play both in Ireland and the Netherlands.

Tiede rarely complained about his 1975 ordeal other than to grumble that his golf grip had been damaged by having his wrists bound tightly in his period of captivity.

His artistic side found expression in the miniature watercolours of Dutch landscape scenes that he painted and sent as greeting cards at Christmas.

In the passing of Tiede and Elizabeth Herrema, Ireland has indeed lost two of its very best friends and a chapter closes on a remarkable story of resilience in the face of adversity.