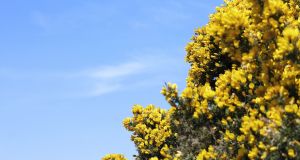 ‘I felt like an ejit standing there with the gorse hedge clippers in my hand.’

I stayed in a Tibetan monastery in India many years ago, and I was escorted around by a monk who was eager to show me all the wonderful sights.

He was particularly proud of a large prayer hall, recently built, with all its shining Buddha’s and endless shrines decked with butter lamps, and silken thangkas flowing down from the rafters.

Outside on the veranda, a swarm of bees had clustered beneath the eves creating what appeared to be a long cone of dripping honey. In fact it was a living swarm of bees in search of a new home.

The monk explained that the Dalai Lama had been visiting the previous week and they had asked him if the bees should be removed.

“Do they sting?” His Holiness inquired.

“We don’t know,” the monks replied.

“Well then,” the Dalai Lama said, “just leave them where they are; they are unwelcome guests but they will go in their own time.”

I’ve always admired that ability to tolerate an intruder, or a hostile guest, although personally I’m far from being a master of non-violence in my own life.

For example one day recently, as I going into my study to work, I got a text from Vodafone saying I was out of data.

I let loose a tirade of expletives at the wall denouncing the entire phone company as a shower of gobshites. I was so furious that I couldn’t work, no matter how long I sat at the desk. Even though it was me that had made the mistake; me that had wasted all the data watching meaningless videos.

I avoided any mention of it. But secretly I grew to hate it

But it was a consolation to suppose that the phone company was the enemy.

The same thing happened with the gorse; that green spikey bush of yellow flowers that sweeps across the mountains in springtime.

I don’t know when it began creeping up the hill and into the field next to our garden, but one May day some years ago it suddenly appeared like a yellow army on our ditch and by the end of that summer we had been invaded by several bushes.

At first I ignored it. I avoided any mention of it. But secretly I grew to hate it. To be obsessed with it. And when we had visitors in the garden the beloved would whisper in their ears; “Don’t mention the gorse!”

It was there all the time, just beyond the garden perimeter. And just as the garden was my Paradiso, so the gorse became its’ counterpoint; an enemy surrounding and threatening my heavenly peace.

I began on my knees, to clip every bush, branch by single branch

This year the gorse bushes were as tall as goat willows. And a strimmer was no use against their woody stalks because no strimmer could cut through that knotty wood.

So I found an old clippers; a yoke for clipping the tops of hedges, and I began on my knees, to clip every bush, branch by single branch.

By noon I had cut down three entire plants, when a neighbour appeared in the next field. His tractor was at the gate, with the engine running and he was walking the field in his wellingtons in the manner farmers do, when they’re about to cut rushes; making sure there was no soft ground where the tractor might get bogged down.

“You’re wasting your time with them bushes,” he shouted. He was laughing. “There’s too many of them.”

“I don’t see any other way to get rid of them,” I replied.

“But sure what’s wrong with them,” he wondered. “If you were trying to grow yellow flowers you’d never get as fine a bloom as them. And there you have them ready made.”

I felt like an eejit standing there with the hedge clippers in my hand, so to avoid losing any further dignity I agreed with him.

“Actually you’re right,” I announced. “Sure what harm are they doing to anyone.”

The amazing thing about hatred is that it has no foundation; it’s like a mirage. Which is probably why it can so swiftly be turn into its opposite. And my war with the gorse was over.

When I look out now, at the waves of yellow bright ditches around me, I no longer want to chop their heads off. Instead I listen to the hum of bees gathering pollen on their lovely yellow petals.

I no longer call them enemies. Even unwanted guests is too negative a phrase. Because I often sit close to them now, and converse with the bees about pollen, India, and the wisdom of the Dalai Lama.