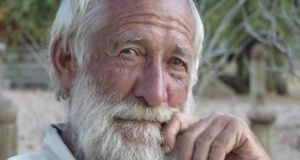 Garth Owen-Smith (1940-2020), a great African conservation visionary and globally recognised pioneer in community conservation, died on April 11th after a long battle with cancer. Garth’s vision of community-driven conservation, which he began to put into practice in Namibia’s arid northwest during the 1980s, laid the foundations for the country’s internationally acclaimed communal conservancy movement, which now covers roughly 20 per cent of the country and has influenced grassroots conservation efforts as far away as Mongolia, Romania and Montana.

Over 50 years ago, Garth Owen-Smith arrived from South Africa to work as an agricultural extension officer in what was South West Africa’s rugged and remote Kaokoland. At that time, wildlife was the property of the state and nature conservation was the domain of white government officials whose job was to keep locals from poaching state-owned animals. Widespread illegal commercial poaching, much of it by South African officials, combined with the worst drought in living memory, had decimated once rich wildlife numbers.

Garth understood that safeguarding wildlife required putting local people in the lead and working in partnership with them.

Operating against the South African apartheid system, and at great personal risk to himself, Garth worked with traditional authorities and rural communities to appoint community rangers accountable to their own communities, whose aim was to stop poaching and not merely to catch poachers.

Within a couple of years the decline of wildlife was halted, and a local vision of wildlife being more valuable alive than killed for food had been nurtured.

In the late 1980s, Garth established the Integrated Rural Development and Nature Conservation (IRDNC), creating what is today Namibia’s leading community conservation NGO. When Namibia gained independence in 1990, a community-based approach to wildlife management resonated with the early idealism of the new government and community-based conservation was integrated into government policy.

By this stage Garth had become a Namibian citizen and focused IRDNC’s work in the northwest Kunene Region and later in the Zambezi Region in the northeast, where IRDNC started working in the 1990s at the invitation of traditional leaders. Over the course of several decades, Garth overturned the traditional conservation establishment with his unwavering conviction that conservation would only succeed if the people who lived alongside wildlife took on the rights – and responsibilities – to manage natural resources.

In time, his conservation contributions were internationally recognised, with numerous awards, including the 1993 Goldman Environmental Prize for Africa, the 1994 United Nations Global Environmental 500 Award, the 1997 Knights of the Order of the Golden Ark Award from the Netherlands, and the 2015 Prince William Lifetime Conservation Award from Tusk Trust.

Garth once said: “The long-term conservation of wildlife will not be achieved by military tactics, on computer screens or at workshops, but by field conservationists who build relationships with the people living with wildlife or around our national parks.”

After stepping down from the co-directorship of IRDNC, Garth and Margie Jacobsohn helped to mentor Conservancy Safaris Namibia, a tourism company owned by five Himba conservancies themselves.

From his home at Wêreldsend (“World’s End”) in a caravan alongside a tin kitchen, many hours along a bumpy dirt road in Namibia’s dramatic rugged northwest, he hosted a constant stream of colleagues and visitors who usually pitched a tent nearby and stayed for several days at a time. Visitors included traditional elders seeking advice on plans to establish a massive conservation area linking the Skeleton Coast to Etosha National Park, young student interns (many of whom are now in leadership roles across Namibia’s government and private sector) asking for insights into his ecological knowledge, government officials grateful for the diplomacy with which he handled complicated conflicts, and members of partner organisations and donors who had become close allies and friends.

He wrote a book, An Arid Eden, that documents the history of conservation in Namibia’s north-west. It concludes with this passage: “My last words are to the younger readers, who can easily be overwhelmed by the magnitude and complexity of the problems the world is facing today. If you believe in a cause and are prepared to stand up for it with passion and perseverance, you can make a difference. Conserving our natural environment will not make you materially rich, but there is no greater satisfaction than having made our planet a better place to live on, even if it is just in a very small way.”

Garth is survived by Margie and his sons Tuareg and Kyle, and his grandson Garth.