My sporting life: lycra bodysuits, bad knees and stray elbows to the boob 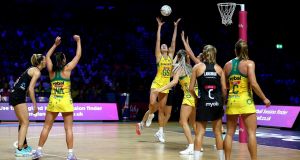 I’m in my 22nd year of unflattering Lycra bodysuits, bad knees and copping stray elbows to the boob. I realised this when I was sitting in the one pub in Dublin showing the Netball World Cup Grand Final, crammed with fellow netball fanatics. All women. All on the white wines.

Even if Australia lost, even if the sound was turned down, even if some absolute knob in a polo shirt watching the golf called it “chick’s basketball”, the best part was being able to watch another hour of something I fell in love two decades ago.

When I’m home in Australia I’m the goalkeeper for the fiercely named Toongabbie Starlights C1 side. I was given that position when I was six because I was the tallest on the team and I’ve played it ever since. Our uniforms are grey and pink and flatter no one’s body shape making us look like aerobics instructors who have given up.

They have an inbuilt pair of undies which means we spend 30 per cent of our time hooking them out of our bum cheeks. But there is no shame. We don’t care. Every game day we leave our children/boyfriends/worries on the sidelines and get to spend an hour focusing on getting a ball through a hoop. My team-mates are almost family now and we’ve seen each other through cancer, break-ups, pregnancy and anything else life’s thrown at us. Including that time we almost got barred from a wine tour bus for reasons we won’t speak of.

All held together by our coach, Mrs N. (I am a grown woman but I’ll never call her Chris, half afraid she might reintroduce her famous ban on boyfriends on the sideline.) An indomitable woman in a pink windcheater, her half-time pep talks always start with “Alright youse blokes, listen up.” We’re all getting older. We wear double ankle guards. Some of us are recovering from childbirth. But we’re there every Saturday in winter.

No matter how vicious the hangover or whether there’s a children’s party that needs 40 mini-pizzas defrosted, that hour on an asphalt court shoved next to a trainline and dirty creek is ours. It’s a space of half-shaved legs, half-smoked cigarettes, Deep Heat cream, cut-up oranges and hair ties around the wrist. And it’s all ours. Secret women’s business. It’s a kind of magic that exists in any women’s sport. I don’t have the personal disregard for safety required to join a camogie team but I bet it lives out there in the training sheds too.

There’s not many spaces in life where women are allowed to be unapologetically aggressive before shaking hands and going for a beer at a suburban pub with the raffle on in the background. Sport is just about the only venue women are permitted to be aggressive in life at all.

We are the sex that spends 10 minutes practising a conversation in our head to make sure we don’t sound too bossy to bank call-centre workers. Even when they’ve made the mistake. We would rather spend 10 years stuck on the wrong mortgage rate than have someone think you’re a wagon. I know I’ve started conversations with male colleagues saying “Sorry and maybe it’s just me but I feel maybe we could just change x, if that’s at all possible lol’’ when I should have said “Look you’ve stuffed this right up mate but let’s fix it.”

We’re not allowed to be openly combative because we’ve been trained to be likable. On the netball court or a football pitch being likable loses your team the game. Organising the work drinks or the maternity leave card for Deb doesn’t count. When you’re in the game you just go for the ball. If someone is in your way, you shove them out of it. It’s not personal, no one’s feelings are hurt.

I loved seeing Australia goal shooter Caitlin Bassett’s smile while dusting herself off after getting hammered by New Zealand’s defence. It says: “Don’t worry, that didn’t hurt but I’m gonna get you for that.” That doesn’t exist in real life. We’ve been denied the natural highs of aggression off the court. The closest we get is signing off “regards” instead of “kind regards” in an email. And it doesn’t cut it.

On the field or the court or the pitch we don’t have to apologise for our feelings or for going after what we want. It’s something I want all women to feel, especially young women. We lose them too early from sport to study, boyfriends, lack of opportunity and lack of encouragement.

I remember an old boss demanding I choose between playing sport on a Saturday and my future as a check-out chick. “Think about what you’re giving up,” she said. I chose the Lycra bodysuit. Looking back I think if she had sport she would have had a much better outlet for her aggression than bossing bored teenagers around a discount department store.

Now I have a new uniform, a nice blue Leinster Netball shift dress. They reached out to me when I moved here (Australian and New Zealanders are always in demand in a small netball market). Between games the girls have offered me lifts, advice on opening a bank account and above all made moving across the world a little less lonely. But what else can you expect from a sport where we run up and down yelling “Here if you need!”

Dede, Baltimore: This chef’s food is always a joy to eat, but I expected more ...