Who are Gen Z? Well Billie Eilish, Coco Gauff and Greta Thunberg for a start

Often referred to in the same breath as millennials, Generation Z (aged between 4 and 24) are the offspring of Generation X 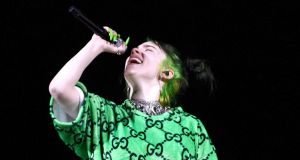 Lena Dunham may be the voice of her generation (or a voice of a generation), but when 17-year-old popstar Billie Eilish was asked about the Girls creator in a Sunday newspaper interview recently, she replied with “Lena who?”

That same week, 15-year-old Coco Gauff made a name for herself when she beat Venus Williams in her Wimbledon debut. Add 16-year-old Greta Thunberg’s barnstorming speeches to various world leaders, and it’s safe to say that Generation Z – born between 1995 and 2015 – have officially landed on-radar.

Corey Seemiller, co-author of Generation Z: A Century in the Making, notes that up until now, the under-25s have barely been afforded an identity of their own.

“Most people are referring to anyone under 35 as millennials,” she observes. “In some ways the torch has definitely been passed, but the name is slower to follow.”

Seemiller’s research on this latest generation has unearthed a demographic marked with intriguing contradictions. They have driven the resurgence of superhero movies, yet are likely to worship larger than life superheroes as much as YouTubers who “look like people might be in their classes”.

“A lot of them group date, and might not go out on a one-on-one date until date five or six, which is interesting,” says Seemiller. “One interesting thing that studies have shown too is that Gen Z are having less sex. Rates of teen pregnancy are down but interestingly, they are also not using condoms as often. In my day as a member of Gen X, all we heard about was public messaging on condoms and ‘don’t drink and drive’ – there’s been a big lapse in that.”

Where millennials were raised by the last cache of baby boomers, Gen Z have been parented primarily by Generation X-ers.

“Generation X has raised Generation Z to look like them – independent, responsible, hard-working and determined,” explains Seemiller. “They like autonomy, yet at the same time, they’re very relational, and have a great sense of empathy and compassion. While some may still come off as entitled, there’s less of it than is often seen with millennials. They’re a generation essentially left to figure it out.

“Unlike millennials, Generation Z does respect and align with the hierarchical culture of a workplace,” adds Seemiller. “They you know can’t walk into a CEO’s office and say, ‘I have an idea’. They understand that there’s a chain.”

So why the apparent disconnect between Gen Z and millennials?

“If you look and trace it back, most millennials were raised by boomers who came from the perspective of, ‘I want to give you kids everything I didn’t’, as these were kids who in turn were raised by parents who had been through the Depression [in the US]. So millennials were given everything but it created a sense of entitlement, even if it was born out of good intentions. Yet by the time Generation X got around to having kids, they were very, ‘that’s not my style [of parenting/]’.”

As time goes on, the tensions between each generation mount up. Popular culture gets lost in translation through the generations, while some have a harder time passing the torch to a more dominant demographic.

Baby boomers usually reckon that their successors have never had it so good. Generation X are often wary of the digital natives essentially born using and controlling the world’s technology. And millennials are often resentful that boomers have benefited the most from the two most significant forms of personal wealth; pensions and property.

American author/venture capitalist Bruce Gibney, himself a Gen X-er, fired quite the shot across the bow, going so far as to liken the boomers’ collective behaviour as sociopathic. Among the charges levelled at the boomers (and it’s worth pointing out that Gibney writes mainly about the subset of white, middle-class US boomers) is that in acting in their own interests at the polling station, they have failed to protect the interests of their children and grandchildren.

Meanwhile, Linda Gravett and Robin Throckmorton, authors of Bridging the Generation Gap, unearthed plenty of interesting data in their research. 68 per cent of Baby Boomers feel that “younger people” have poor work ethic. Yet millennials can feel they have a work ethic they’re not given enough credit for.

Suffice to say that Generation Z have plenty to feel shortchanged about. Chief among their biggest bones of contention, says Seemiller, is the issue of climate change.

“[Generation Z] don’t say, ‘I’m worried about the environment’, they say, ‘I’m angry about the environment’,” she observes. “They don’t blame the generation that created plastic and didn’t realise how it would destroy the environment, but they are mad at the policy makers who knowingly continues to do certain things in the name of profit. Generation Z’s biggest passions are human rights and social justice. There’s a real sense of ‘you are the grown-ups and you should know better. You’re strangling us and you don’t care’.”

Politically, the boomers’ galvanised sense of social focus have turned them into a huge, cohesive political force. Ensuing generations are more diverse groups, each with many different viewpoints. All very well, but it does make them less effective as a voting entity.

Many of Gen Z, meanwhile, aren’t old enough to vote yet: “It’s interesting that so many of them are fired up about things, but when you ask them about voting, they will say, ‘I don’t vote. I don’t think my vote matters’,” says Seemiller. “In some ways they want to make stuff happen but they’re checking out of the traditional ways in which they can do that. I guess in the US we are waiting to see how the 2020 election is going to be. I know there’s a growing sense, given that a lot of their viewpoints run counter to the current political administration, that they have to show up.”

Already, an intriguing sea change is afoot. Thousands of Gen-Z youngsters have protested visibly against climate change, although their decision to leave classrooms by way of protest was met with no shortage of derision in some quarters. In the US, the Parkland shooting in February 2018 sparked a national youth protest movement.

“People aren’t taking Gen-Z seriously now, but they will almost certainly step up as a political and economic block who will do things a very new way,” Seemiller surmises. “And people are definitely starting to notice.”

Pavlovas with summer berries: The perfect finish to any meal
4