Alison Spittle: ‘My motto for life is, be sound’

Life Lessons: ‘I’ve been guilty of gossiping and being jealous’ 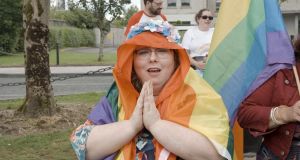 Alison Spittle: ‘I keep telling myself I don’t have the time for a nervous breakdown at the moment.’

Comedian Alison Spittle has two shows at Dublin Fringe 2019: a debut of her first play Starlet (September 17th-22nd) and the premiere of her new comedy show Mother of God (September 7th-13th). fringefest.com

The biggest challenge I have faced in my life is… probably this month. I have to prepare for two Fringes (Dublin and Edinburgh), and I have a script deadline for another project. This is what I wanted, so I feel self-conscious about being stressed. I don’t know how people do it. I keep telling myself I don’t have the time for a nervous breakdown at the moment.

The best advice I ever received was… a comment a wise comedian said about another comedian that stuck with me: “If he spent his time writing jokes instead of moaning about other comedians’ success he’d be a successful comedian.” I’ve been guilty of gossiping and being jealous, so I took that to heart.

The worst advice I ever received was… Himalayan salt lamps will cure depression.

The moment that changed my life was… doing a not-so-great show. A few people involved could tell it was going to be bad, but I was new and optimistic. I put my all into it, I wrote for weeks, and treated it seriously as I’d nothing else going on in my life at the time. Someone in the audience that night gave me an amazing opportunity that changed my life.

The person I admire most is… first off, I love my mam. The holy quaternity of comedy for me is Sharon Horgan, Maeve Higgins, Aisling Bea and Eleanor Tiernan. Ellen Coyne, she’s a fearless journalist who is incredibly empathetic, talks about very important things but has the intelligence and lack of ego to contextualise Love Island. She’s the real deal and I want to see her thrive.

The biggest influence on my career has been… probably Bren Berry from Aiken Promotions taking a chance on me for Vodafone comedy festival all those years ago. I sent him an email when I really had no business asking him for a gig. Over the years I’ve come to realise he cares a lot about the state of Irish comedy. I’ve never felt out of place or like a small fish. It pushed me on to do better things, because people like him had faith in me.

A practical thing I do to help my personal development is… try and not be so hard on myself. Also, to be inspired by people doing well and to not be intimidated by my own self-loathing and become self-destructive. As the big man upstairs says, “if you can’t love yourself how the hell are you going to love somebody else. Can I get an amen?”

The thing I’m most proud of is… probably what I’m bringing to the Dublin Fringe this year.

My motto for life is… Be sound.