I am nagged by the feeling that, if she were here, she might be saddened by my progress 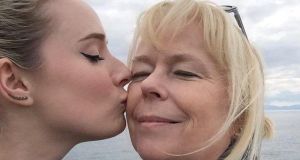 Laura Kennedy and her mother, Emma

The older I get, the clearer it becomes that balance in life is probably an insidious fiction. This is a sad realisation. I’m not one of those people who had every aspect of their future planned from their teens, down to the flavour of cake at the wedding and knowing precisely what job I would be doing by 30.

More than anything, I did not want to have my mother’s life. That looks unkind when I read it back, but she didn’t want me to have her life either. Her life’s work – apart from the multiple jobs she always had on the go – was pushing us up and out of her situation. More than anything, our mother wanted better for us than she had for herself. Is it any wonder, then, that like many members of my generation, I so often feel as though I’m failing? Failing my mother, dishonouring the effort she made for me and failing to achieve a balance that makes life feel satisfying rather than overwhelming – a balance that she never had.

My life is better than my mother’s in so many ways. She raised us by herself, leaving me with what is probably an unhealthy terror of single motherhood. I know she felt trapped, even though she loved us. She was trapped. I don’t have financial dependants apart, I suppose, from a very resource-hungry cat who might well eat my eyeballs if I suddenly died alone at home, and who has her own (photo optional) passport as a result of two international house moves. I have a lovely partner – my mother really did not have anyone but herself. She spent a huge quantity of her life worrying about paying her bills, and every month it was an ordeal that left her pallid, exhausted and frightened.

Recently, while at a lunch with the family of my partner (when will online culture invent a word for “boyfriend” for unmarried people over 27 that doesn’t sound like they co-own a dry cleaner?), we got chatting with a family friend in her 60s. She wanted to know when we were going to buy a house, which is a fair enough question, especially for a person from a generation for whom home ownership was a given. My “manpanion” (I’m so sorry) and I have been together for a long time now. Why, she wondered, have we eschewed the traditional rites of passage into proper adulthood?

The question is understandable, but I want to gnaw my own hands off every time someone asks it, and it always makes me feel like a failure, because it brings me back to an incessant sense of insecurity that I associate with and perhaps inherited from my mother. The last time that I touched this topic in writing, George Hook took umbrage on his radio show, and wrote off my whole generation as unwilling to work hard enough to earn what we want. Something is definitely wrong when a couple of people – both with PhD level education – can get rinsed paying double the average monthly mortgage payment in rent, leaving them unable to save and consequently to get a mortgage.

I come from a generation for whom career jobs (into a company at 21 and out at retirement) no longer exist. Permanent contracts are very difficult to find. Job hopping is standard. Of course, I made the decision to go into something unreliable, and that is on me – writing is not a grown-up job (don’t tweet me) and journalism today is the career longevity equivalent of one of those freshly born deer trying to wobble on trepidatious little hooves when a bear suddenly bursts out of the undergrowth and eats it alive, genitals first. But friends with more “sensible” jobs – administrators, teachers and business owners – have the same uncertainty around owning a home and envisaging a secure future.

I am so much luckier than my mother was, and I feel it every day. I am nagged, however, by the feeling that if she were here, she might look at my life and be disappointed by my progress. Other than going back to study computer science, I’m not sure what to do about that.