Michael Harding: A more charming man than Jim Wells you could not meet in a day’s marching 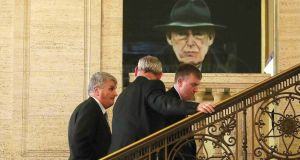 Jim Wells, left, leaving the Assembly Rooms at Parliament Buildings, Stormont: ‘A man of strong convictions, and an evangelical Christian, so we got on fierce well.’ File photograph: Jonathan Porter/Press Eye

I was in Dublin recently for an episode of The Tonight Show, discussing same-sex marriage in Northern Ireland. Not that the show is a great arena for serious debate; with a panel of four, there’s just about time to fling out a few soundbites like tennis balls from a fast racket.

And Ivan Yates usually looks like he’s watching a hot-tempered match at Wimbledon, fearful that someone will lose the cool. Sometimes he pokes the guests like an umpire just to see how frayed their tempers are. And when it gets hot, he and Matt Cooper do a very good “Rosencrantz and Guildenstern”; looking mystified as if they were in the wrong play. No wonder the guests in the green room before the show swot over notes like students before an exam.

Although Jim Wells (DUP) would never bother with notes. He talks from the heart, and a more charming man you could not meet in a days’ marching. A man of strong convictions, and an evangelical Christian, so we got on fierce well. Although he did wince a bit, when I confessed that I voted yes in the referendum to repeal the Eighth Amendment.

I like to keep up to speed with the intellectual wing of the DUP because it gives me a sense of belonging; as I reminded Jim, Cavan is still in Ulster, even if 200,000 evangelical Christians up the road consider us to be part of a foreign nation. I suppose Ulster is still an evolving project.

On July 12th I was emerging from a church in Bundoran when an elderly lady accosted me.

“Is it you?” she demanded with as much existential uncertainty as Hamlet when he stood on the battlements, in the presence of his father’s ghost.

“You were abusing that good Christian DUP man, just because he’s against same-sex marriage.”

“Madame,” I declared, “may I buy you a coffee? I know a place yonder at the seafront where it’s not expensive.”

“You’re truly a disgrace,” she reiterated, as if my invitation to coffee indicated another flaw in my character.

We went to Guys and Gulls, where she scanned the young people with some disapproval and said she would just have a cup of tea.

“My mother also used to insist on tea,” I said, “whenever I invited her for coffee.”

“So what are you doing in Bundoran?” she wondered.

“My daughter runs a business,” I said, “in Mullaghmore. It’s called the Wild Atlantic Wagon.”

“That’s a very rude word for a girl.”

“No,” I explained, “she’s not the wagon; it’s a real wagon behind a horse, and she takes people for little excursions.”

That’s when the man with the tattoo arrived and identified me.

“That’s you, isn’t it?” he said, as if I were in a police line of potential criminals.

“Oh aye,” he said. “It’s you alright. I seen you on the telly with yawn politician.”

We didn’t invite him to sit but he slipped a stool under his bum with terrifying dexterity. His head was shaved and he squared his shoulders towards me. The gym work showed in his mighty limbs and a green vest held his torso in perfect solidity with a dainty Union Jack tattooed on his chest. His slim waist was firmly belted, his trousers green and his boots so black that I could see the old lady’s face reflected in them.

“You were talking with that DUP man,” he said.

“He was no clown,” the old lady countered. “He’s doing his best to stop those people getting married.” She pronounced the words “those people” with great distain.

The big man looked furious and it dawned on me that he might well have a husband at home.

“Who are you?” he wondered, like he was Hamlet and she was his mother.

And then the row started about whether the DUP was on the side of God or the Devil, and the big man with the Union Jack tattoo declared the DUP to be wicked, and the little Catholic lady declared them to be pure saints.

But when I got as far as Mullaghmore I hopped into the back of the Wild Atlantic Wagon and the daughter steered the horse.

“I saw you on the television,” she said.

“Don’t start,” I replied, and then we let the ocean talk; for a long long time.