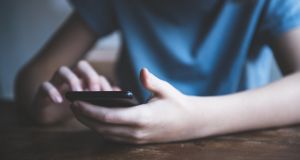 As a parent, it is hard not to wonder exactly what you’re doing when you put a smartphone into your child’s hands for the first time. Photograph: iStock

This isn’t going to be easy Saturday morning reading. These are things that are difficult to talk about, difficult to think about.

At the Central Criminal Court earlier this year, the now 16-year-old pleaded guilty to five counts of oral rape and 44 counts of sexual assault of his half-sister. He was ordered by Mr Justice Michael White to live away from his mother’s home as part of a suspended sentence.

This case, the judge said, was the fourth he had personally dealt with, in which “young children have committed the most serious offences”, starting with “exposure to pornography on smartphones”.

“It is very serious and a matter of great concern,” he said. The kind of offending the court is seeing “goes way beyond consensual sexual experimentation”.

As a parent, it is hard not to wonder exactly what you’re doing when you put their own smartphone into your adolescent’s hands for the first time.

So what are parents to do? Some try to hold back the tide, and refuse to give into smartphones for as long as possible. My 13-year-old has an old-fashioned Nokia brick.

The rest fall roughly into two groups, divided along either side of what researchers in the US call the “parental naivety gap”. On one side are the ones who give their child a smartphone after their confirmation, and try not to think too much about what they might do with it. My child wouldn’t, they say optimistically. I know my son. My daughter’s not like that. He wouldn’t. She won’t.

But here’s the thing. Sexual curiosity is normal. Children being eager to find out what all the fuss is about is normal. But children viewing endless, sexually explicit, and often violent, material shouldn’t be inevitable. And in our efforts to be realistic and grown-up about this, we may be in danger of normalising something that is not normal.

It sometimes feels as though, lured by the promise of (convenience? Security? Connectivity? A quiet life? Not having to say “no” when every other parent in your circle is saying “yes”? All of the above?) we have unthinkingly signed our children up to a social experiment. And we’re only beginning to witness what happens what the experiment goes horribly, unimaginably wrong.