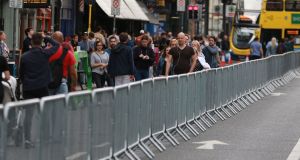 The first Sunday College Green was closed to traffic and converted into a plaza with crowd control barriers along Dame Street. Photograph Nick Bradshaw 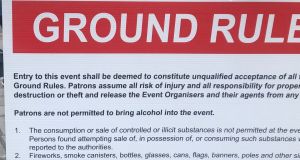 The ground rules for a traffic-free College Green.

Last weekend, Dublin City Council closed College Green to traffic for the first of three consecutive Sundays. It was meant to be an exercise in opening up the city centre to pedestrians, and families and tourists. To try to refocus the city centre as a calm place to be, and to encourage people to spend time there, as one would in a park or a city plaza elsewhere in Europe, where they do public spaces far better than us.

It didn’t work out like that. Barriers lined the streets, creating an atmosphere the opposite of inclusion and openness. People who had turned up expecting nothing except the freedom to move where they wished on the street were unimpressed and annoyed. It had all seemed so simple: divert traffic and close the street. Why did there have to be all these steel barriers?

Apparently because it was an “event”. And with an event, there are rules. Great big signs were attached to barriers, declaring “Ground rules”. These rules were patronising and, in some cases, bizarre. The public are not, it appears, to be trusted to walk the streets of their own city centre on a Sunday.

Dublin City Council had many rules for those in attendance; nine ground rules to be precise. Do they think we are so lacking in common sense that we need to be told how to behave when a street is cleared of traffic?

These are the ground rules that were plastered everywhere last Sunday. And good luck reading them on the sign if you are over 40 and have any kind of eye trouble.

1 The number one worry in the heads of the people at Dublin City Council was: “The consumption or sale of controlled or illicit substances is not permitted at the event.”

Obviously, you were not coming into town to relax and enjoy a traffic-free city centre. No, your real suspected intention was to sell either booze or drugs and then drink and do as many drugs as you could.

2 Their second-biggest worry? That there was more than a reusable bottle of water in your bag, which would have to be the size of a county to fit all this stuff in it. Namely, “Fireworks, smoke canisters, bottles, glasses, cans [they’re clearly still fretting about booze, even though we’ve now moved on to rule two], flags, banners, poles and other similar articles or containers or anything which could or might be used as a weapon.” Because there’s nothing like a pedestrianised street to bring out the fighting Irish.

3 Curb your inner mountaineering instincts. “The unauthorised climbing of crowd barriers, fences, stages, floodlight towers, buildings or any other structures on the event site is forbidden.”

5 “Any person who fails to comply with the instructions from a steward may be ejected from the event.” It’s hard to keep track of who is who. Were the security guards double-jobbing as stewards? Were they going to stick troublesome people in cannons and eject them out over College Green?

6 I have no idea what this means. “In general, the right of admission is reserved by both event site management and the event site owners or their agents.” I thought College Green belonged to us all? What is this “event site owners” business? Has it been sold to some property developer?

7 “The management reserves the right to refuse admission.” Someone has been sleeping on the job. That’s the same as ground rule number six.

8 I won’t bore you with rule eight. It’s more stuff about why you could be removed from the event.

9 You have an “obligation under the Fire Services Act to ensure that your behaviour does not present a danger to fire to anyone using the event site”. Did you know about that particular Fire Services Act, and your obligation to it? Well, now you do.

The moral of the ground rules story is leave your tinnies and your flagpoles and your confusing behaviour at home, and come enjoy Dublin’s second traffic-free Sunday tomorrow. Because here’s my own made-up Rule 10: Enjoy yourself. And that’s an order.

Welcome to my Place ... Leiden, The Netherlands
6

Chinese new year: celebrate the Year of the Rat with dumplings
Real news has value SUBSCRIBE