Hilary Fannin: I heard my granny was a social climber, laughing behind her slash of red lipstick, which she wore even as a corpse 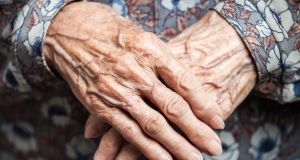 My grandmother would offer me money to go away, so that she could kick off into an orbit of her own where the stars were tinged with nicotine. Photograph: istock

I think the unidentified flying object recently spotted above the Kerry coast may have been my Listowel-born paternal grandmother. The pilots reported that the object seemed to come uncomfortably close to them before zooming off into the stratosphere, tail-lights blazing. This is uncannily similar to my grandmother’s modus operandi, which was to prop her sinewy elbows on the arms of her chair, tilt her patchy, feathery head in my direction and scrutinise me long and hard from above the lip of her amber glass, one eye closed against the trail of blue smoke emanating from her untipped Player’s cigarette.

Deeming me beyond her capacity for interest (it might have helped if I was a greyhound), she’d offer me money to go away, so that she could kick off into an orbit of her own where the stars were tinged with nicotine and the lakes were filled with single malt whiskey.

As a child, I didn’t like her; she unsettled me. Her ankles were snap-thin, her fingers gnarled, her eyes remote and cloudy. A singular woman, more interested in dogs and horses than making fairy buns or engaging in a jolly good game of dollies, she didn’t much go for the cosy-granny shtick beloved of my illustrated storybooks and my Twinkle comics.

I remember her funeral: my father, edgy and distracted, looking at his watch and running his hand over the line of his jaw; and his only sibling, a sister he barely acknowledged, arriving at the sparsely filled church with her money in a baby’s sock pinned inside the waistband of her trouser suit.

My grandmother has been dead a long long time now, and her children have been dead a long time too. The dark and poky old house she rented in Sandymount for all those years is probably filled now with a sunny family, basking under solar panels in their light-filled kitchen extension and revelling in effective storage solutions and clever bin systems which somehow enable them to dump any lingering grubby generational pain along with their physical detritus.

I heard that she was a social climber, laughing shrilly through her pearly teeth, behind her trademark slash of red lipstick, which she wore even as a corpse

I know little about my grandmother’s life. I know that her childhood was hard. I have heard stories of murder (actual murder) and emigration and belligerence, and of drink, an ocean of drink. I know that her marriage to a delicate Protestant, a kind but ill man, was not enough to assuage her ire. I’ve been told that she became a vain and powdery woman, anxious to distance herself from a less than fragrant past. I heard that she was a social climber, laughing shrilly through her pearly teeth, behind her trademark slash of red lipstick, which she wore even as a corpse.

I don’t imagine I would have sought out her company if I was her contemporary. I don’t imagine I would have waited with her on the wind-blown strand for the bus into Grafton Street, to stare with longing at the seal-fur muffs in the window of Barnardo Furriers. I don’t believe I’d have liked her any more as an adult than I did as a child, but I do understand enough about our collective history to know how limited the choices were for Irish women born in 1900 without property, money, or education. I think I know enough to feel sympathy for her.

I thought about her the other day after a phone call I had from a friend who has just become a grandmother. My friend was thrilled, and her happiness was intoxicating. I put down the phone, picturing her youthfulness and thinking how difficult it was to assign the word “grandmother” to her. Not that the term really means what it used to any more – the grandparents I know nowadays seem to play vital and practical roles in the lives of their families. They’re picking grandchildren up from creches and grilling fish fingers and driving to matches and hunting under beds for lost iPads, and then they’re handing back their charges and gleefully pursuing their own fun. It’s a different world.

I visited my father’s mother shortly before she died. I remember her skin, dry as parchment, and her sparrow-thin legs, bandaged like a mummy, propped on a pillow on her nursing-home bed. Looking back, I realise that she was barely into her mid-70s. Today she’d probably have a Tinder profile and be speed-dating in her fascinator and fake pearls. I remember her offering me 10 bob to go away, and I went, thinking that I’d never seen anything or anyone so entirely ancient, so utterly and indisputably alien.