Conor Pope: In the world of my two daughters, I’m now as uncool as a pink unicorn umbrella 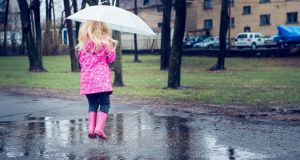 The plan was to walk to school as normal, laughing in the face of the weather, with me singing ‘Singing in the Rain’. Photograph: iStock

Two of my little girls have unexpectedly turned into teenagers well ahead of schedule, and it started happening last week as we stood in driving rain outside our house.

It was Wednesday morning, and the plan was to walk to school as normal, laughing in the face of the weather. Obviously, I didn’t want them arriving in school soaked, so I tore the house and then the car apart searching for one of the two giant umbrellas I was sure we had. Then, with much of my world turned upside-down, I remembered both were warm and dry in my office, which must have been nice for them.

Once I realised we were umbrella-less I was faced with two choices – neither of which seemed attractive. I could pack us all into the car and get snarled up in bad-tempered traffic which would see us arrive late and cranky to school. Or we could walk, sheltered only by two pink umbrellas festooned with unicorns and princesses bought when my little girls were a lot littler than they are today.

I went for option B and, as I fished the ridiculous umbrellas from deep inside a cupboard full of lost things, I recalled with a smile how delighted they’d both been when we’d bought them and how proudly they’d wandered the streets of Dublin 7, in sunshine and rain, with their umbrellas held high.

When I showed them how we’d stay dry on our short hike to school, their faces grew as dark and thunderous as the clouds above. They explained in unison – and in terms that left me in no doubt as to the depth of their feelings on the matter – that they’d not be walking to school, or anywhere else ever, with the umbrellas retrieved from times past.

With the clock ticking, I gently(ish) explained we’d two choices. We could get saturated or we could use the umbrellas. They immediately opted for choice number one, forcing me to admit that I’d in fact lied and there were no choices on the table. The umbrellas were it.

They said no, with the trenchant resolve of mini-DUP MPs, but I stood my ground and explained I wasn’t for turning. The news didn’t go down well and off we stropped to school, them all scowls and harrumphs and me gently – and flatly – singing Singing In The Rain in a misplaced attempt to lighten the mood.

So half-hearted were their efforts at holding the unicorns and princesses in the correct position that I took on the role myself and held an umbrella over each small head as we walked. Repeatedly they asked when I’d be collapsing them and, as rain hammered down on the faces of the unfortunate unicorns above my littler one, we hammered out an accord which would see me hold the umbrellas over their heads only until we were in sight of the school, after which I’d make them disappear. They added a further condition to the Wet Wednesday Agreement that I stop singing in the rain. And talking.

I could hear echoes of myself in their moaning and had a flashback to the endless cycle of arguments I had with my own father over the rain and the reflective gear he used to insist I wore when cycling on dark, damp roads in the west of Ireland.

I’ve always known this moment would come, a time when I would become an embarrassing feature in my little girls’ world

Given the choice of risking a cold and wet death on the side of a road or looking ridiculous as I cycled past the Dominican Convent on Taylor’s Hill, I would invariably choose the former. I was so ridiculous in my determination not to look ridiculous, in fact, that there were times – and I’m not proud to admit this – that I would dress in the rain gear and the fluorescent Sam Brown belt demanded of me by my dad before cycling around the corner. Once there I’d strip off the protective gear and set off on a mortifyingly stupid and dangerous cycle to school in the wettest of Galway rain. I would then sit, cold and damp, in a miserable classroom congratulating myself on the wisdom of my choices.

With such a track record, who was I to judge my children for their stubborn foolishness? We got to the schoolyard gate with the umbrellas long-since collapsed as agreed. And then my heart broke a little. I was told that instead of walking them to their classrooms as normal, I was to go no further and they would take it from here. They looked crossly at their little umbrellas and marched off to their respective classrooms.

I’ve always known this moment would come, a time when I would become an embarrassing feature in my little girls’ world as opposed to being one of the things it revolved around. And, if my own teenage years are a guide (and I fear that they are), I know we’ve a long road to walk yet. I also know that come what may, we’ll walk it together and I’ll be the one holding umbrellas – metaphorical or otherwise – over their heads. Whether they like it or not and no matter what they say or do.