Ross O’Carroll-Kelly: ‘I swear on my children’s lives I’ve had no contact with Peter Casey’ 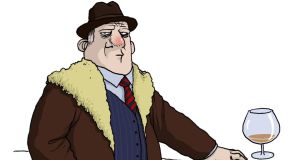 “If it was up to me, you’d be watching the end of this match from pitch-side, cheering Ireland on through a hole in your throat.”

It’s unbelievable. Ireland are leading the All Blacks by 10 points with 15 minutes to go. But the tension down on the pitch is nothing compared to the atmos in the old man’s corporate box.

Hennessy has uncovered a plot to replace the old man as the leader of New Republic with Peter Casey. And yet Eduard, the chief plotter, is helping himself to the old man’s scotch and his turkey and Brie mini ciabattas as if nothing was wrong.

Hennessy is fit to kill him – quite literally as it happens.

“Forty years ago,” he goes, “I’d have cut his throat, thrown him over the rail and watched him bleed out in the West Stand Lower. I hate the way politics has gone.”

The old man’s there, “Calm yourself, Old Scout. I told you how I wanted to handle this thing.”

“It still makes me angry, Charlie.”

The All Blacks win a penalty. Me, JP, Oisinn, Fionn and Christian look at each other. We’re all thinking the same thing. Not again. Beauden Barrett splits the chopsticks and suddenly it’s a one score game with 10 minutes to go.

Eduard looks around him and goes, “It’s all beginning to look a bit inevitable, isn’t it?”

And Hennessy can’t stay quiet any longer. He’s like, “That’s always been your fundamental problem, Eduard – your lack of faith.”

Eduard has no idea what the dude is even talking about. He goes, “What’s that supposed to mean?”

The old man shakes his head. “Hennessy,” he goes, “this isn’t how I wanted to do this thing”.

“We know,” Hennessy goes. “All about your contacts with Peter Casey.”

Oh, that shocks the dude. He turns pretty much white. He’s there, “I swear on the lives of my children that I have had no contact with Peter Casey.”

“I’ve been tapping your phone for weeks,” Hennessy goes. “And reading your emails. Who’s Aurora, by the way? Does your wife know about her?”

Outside, beyond that glass, the roar goes up as the hits go in. This is – honestly – the greatest performance I’ve ever seen from an Ireland team and yet it’s hord to know whether to watch what’s going on out there or what’s going on in here.

“Oh, so that’s what this is?” Eduard goes. “You’re going to try to blackmail me, are you?”

Hennessy’s like, “Hey, if it was up to me, you’d be watching the end of this match from pitch-side, cheering Ireland on through a hole in your throat.”

“Was that a threat? Because there are witnesses in this corporate box,” and he immediately looks at Martell Bagnel, a dude the old man knows from Portmornock Golf Club.

Hennessy laughs. “Of course,” he goes, “the New Republic candidate for Cork South-Central is in on it, too. Your grammar is atrocious, by the way.”

“I’ll sue you for breach of privacy,” Martell goes.

“Stop!” the old man suddenly shouts. “This isn’t how I wanted this thing to play out.”

“My wife knows all about Aurora,” Eduard tries to go. “We’ve had an open marriage since 2003.”

I wish I could record this and watch it straight after the match.

“No one’s trying to blackmail anyone,” the old man goes. “As a matter of fact, I’m more than happy for this matter to take its democratic course.”

“Well, I presume you’re planning to table some kind of motion of no confidence in me at the Ord Fheis in two weeks’ time?”

The dude can’t even look the old man in the eye.

“Yes,” he goes. “I’m sorry to say it, Charles – I know we go back a long time – but I don’t believe you are the man to lead the party into the next general election.”

Joey Corbery comes on for Johnny Sexton. “For me,” I go, “that was Johnny’s greatest ever performance in an Irish jersey”.

Oisinn’s there, “You say that every time he plays.”

“And I mean it every time he plays.”

The old man just smiles at Eduard. “I understand where you’re coming from,” he goes. “Peter Casey has arrived on the scene. He’s younger than me. He’s got more energy. I can understand how people might see him as the future of the party and me as the past.”

“I realise that. Which is why I’m prepared to step aside as the leader of New Republic.”

“If you can show me over the coming days that there is an appetite for change among the membership, then I’ll stand down before you even have to submit your motion.”

“That’s very magnanimous of you, Charles.”

“Whatever else I might be, Eduard, I’m still a believer in democracy. Now, can I ask you to leave please?”

“But there’s still two or three minutes left. I’d like to see how it ends.”

“Why don’t you ring Peter Casey? See if he has a corporate box in the stadium?”

“Oh, well – it takes all sort, etcetera, etcetera. I’m sure he’ll bring other qualities to the job. Now, please be gone – and take your co-conspirator with you.”

The two dudes leave, muttering to themselves.

“Shame,” the old man goes. “I was considering Martell as my future minister for foreign affairs.”

I watch with my hort in my mouth as the All Blacks stort pinging the ball around. I reach for a turkey and Brie mini ciabatta and the old man goes, “Probably best you don’t eat those, Kicker,” and then – I swear to God – Hennessy opens up a Tupperware container and tips what’s left of them into it.

Hennessy goes, “Get these out of here,” then he hands the container to some dude in a black suit, who puts the Tupperware box into a briefcase and walks out.

The old man stands beside me and stares down at the pitch. “They’re going to hold on,” he goes.

A second or two later, New Zealand drop the ball and it’s all over. And suddenly Martell comes running back into the box, going, “Quick! Something’s wrong with Eduard! He’s fallen down the stairs!”

Nobody moves. And the old man goes, “That’s the wonderful thing about this team. They simply refuse to be beaten.”