Michael Harding: ‘Rage began to boil inside me, but I didn’t let it surface’

I distracted myself with my mother’s old mantra: I don’t know where I am today 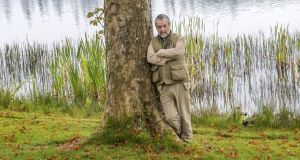 Michael Harding: there are moments when the phrase operates like a prayer; a trip switch. Photograph: Brenda Fitzsimons

My mother regularly declared that she didn’t know where she was; an odd remark when she was standing in the kitchen. But what she really meant was that she felt confused or discombobulated.

When her sister arrived one day at the front door, without advance warning my mother led her to the sittingroom, returned to the kitchen where an apple tart was baking in the oven and where I was recently arrived from school and hoping for dinner, and I remember her using the phrase with gusto; “Mother of God,” she declared, “I don’t know where I am today.”

My mother and her sisters behaved as if they didn’t like one another. They interrogated each other on the couch like barristers trying to deconstruct the intimacies of hostile witnesses

It wasn’t meant in a literal sense. It was an expression of detachment; a way of avoiding anger by acknowledging that she didn’t feel entirely happy in the fast changing pattern of reality around her.

Even at nine years of age I was in no doubt that her sister’s unexpected visitation had thrust her into a state of emotional rage. Maybe she had been hoping to spend the afternoon dozing with Woman’s Own magazine on her lap, while the apples stewed in the oven. But the sudden arrival of her sister changed all that.

My mother and her sisters behaved as if they didn’t like one another. Whenever they met they brushed frosty cheek to frosty cheek, with the spontaneity of the Soviet Politburo, and they shook hands with their gloves on. They interrogated each other on the couch like barristers trying to deconstruct the intimacies of hostile witnesses. Although to my amazement, when they parted, it was always with hugs and tears and promises to meet soon again, like the loving sisters they really were.

“Your aunt is in the sittingroom,” my mother hissed as I slung my schoolbag down on the kitchen table. “She thinks I can down tools all of a sudden whenever she marches through the door.”

Mother almost let the apple tart slip to the floor as she took it from the oven with a towel and flipped it on to a fancy china plate, poured scalding water into the long spouted teapot and said: “Come on, we better go into the sittingroom and entertain her highness.”

And as I opened the door for her to carry in the tray she whispered it again, smiling. “I really don’t know where I am today.”

She didn’t know whether to be angry with her sister for arriving from Dublin without notice, or delighted to have someone to share the afternoon with. And I even detected a certain glee in the mix also, since she had been capable of producing a hot apple tart from the oven, like a rabbit from a hat.

I distinctly remember the contorted pain on aunt Agnes’s face later as she was forced to utter the words,“That pastry is very light.”

I’m in Poland at the moment, but I woke up the morning after I arrived thinking I was in Leitrim. I was wondering why the cat had not begun scratching at the window to be let in

Since the beginning of the year I’ve also had a few occasions to use the phrase; I don’t know where I am. Although I use it in a literal sense, referring to the geographic context of my location.

For example I’m in Poland at the moment, but I woke up the morning after I arrived thinking I was in Leitrim. I was wondering why the cat had not begun scratching at the window to be let in, when I heard a jack hammer and realised I was in the middle of Warsaw.

And sometimes when I’m walking around the city I get cocky enough to turn off Google Maps and then I end up in the wrong place, standing at some desolate street corner wondering in a very concrete way, where I am.

But there are other moments when the phrase operates like a prayer; a trip switch, preventing me from engaging too fiercely with the world around me. It has a lightness that dissipates anger.

When I woke in Warsaw this morning the apartment was cold. I was shivering in my pyjamas. The jackhammers were already at work across the street. And moments later there was a power failure in the entire block, so I had no phone or internet. I couldn’t shower and I didn’t even have a functioning kettle to make a cup of tea.

Rage began to boil inside me, but I didn’t let it surface. I distracted myself with the remembrance of apple tarts long ago and how quickly life passes. And then I comforted myself with that old mantra; I don’t know where I am today.