I’ve long given up trying to be cool and aloof. Now I’m an expert at small talk

The pleasant, largely meaningless drivel we engage in must have mental-health benefits 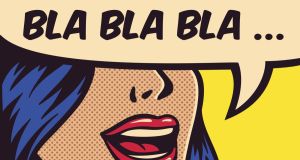 I’ve been thinking about the mental-health benefits of chit-chat, the pleasant, largely meaningless drivel we engage in to keep our jaws oiled and our vocal cords as firm and springy as that new mattress just bought in the January sales.

Maybe small-talk proficiency comes with age. Having long given up attempting to be cool and aloof, I now find myself burbling away with the best of them, more often than not in the supermarket aisle.

“Look at that! Half-price frozen turkey crowns and battered boxes of chocolate-coated Mikados! Now if we’d a grain of sense we’d be stocking up for next Christmas already! All the same, I couldn’t look at a giblet in January without wanting to commit hara-kiri with the plug-in plastic reindeer!”

I had a pleasant conversation in the shopping-centre cafe recently with an impeccably well-groomed woman who was standing next to me in the queue, her ringed fingers resting on what I assumed to be a dolly pram.

I was in line to buy a frappuccino for an absent imbiber who, feeling under the weather, was waiting for me in the car with a boot full of flaccid satsumas and an ageing celeriac.

The dog was on the phone, ordering some bespoke shelving and a smart TV with a soundbar for his kennel

Something inside the well-dressed woman’s miniature perambulator barked, quite possibly in irritation at my dithering and novelty-coffee ignorance. I looked under the hood. A pretty little brown-eyed dog glared back.

“I never thought I’d be a doggy-buggy kind of person,” the woman offered.

“Oh, he is. He hops in quite happily after a little walk, and it means he never has to wait, tied up outside in the cold, for me.”

The woman, who was not yet elderly, was wearing layers of soft knitwear and suede boots with a fur trim. I looked down at my battered runners – last spring they were dusty pink, now they’re just dusty.

The dog was on the phone, ordering some bespoke shelving and a smart TV with a soundbar for his kennel.

“Cream or no cream?”

“Do you or don’t you want cream in your frappuccino?”

I made my way back through the drizzle to the car.

“Why didn’t you get cream?” asked the frappuccino drinker, who is still young enough to be chillingly cool and taciturn.

It was New Year’s Eve. Later, I put the potatoes in the oven and walked over to my local.

The old red velvet banquettes had been removed and replaced by durable wood-effect chairs. I used to like the battered, ominously stained, mephitic banquettes, even if you did sit on them with some degree of trepidation. If those banquettes could have talked, there’d have been more yak than yakety.

“Where are the banquettes gone?” everyone asked. And then someone bought a round and the night began.

Later still, we sat around my kitchen table and ate the not-quite-burned potatoes from the oven alongside the wrinkled celeriac, which had softened to a baby-friendly mush. The conversation that we gamely batted around that night, as we clinked our unmatched glasses and contemplated the new decade, largely seemed to revolve around catastrophe.

While the clock crept towards midnight we discussed climate change, environmental destruction, fiscal fascism, religious mania, populism – oh, and feline longevity. Then, to keep the spirits up, we took a quick and familiar twirl around unresolved pain from the past. And after that we shared some bleak predictions for the future, including how we’d soon need to put the house on stilts to stop Dublin Bay seeping in under the doors.

We refilled our glasses, the consensus seeming to be that in a race between liver disease and the end of the world as we know it, the apocalypse would probably get there first.

Lightening the mood, someone then suggested we go round the table and each offer a personal aspiration for the next decade. Unexpectedly, a couple of people said they’d like to travel to Iceland in some woke way (quite possibly by fashioning a canoe from the scattered corks on the table).

I said I’d like to write another book. But I wasn’t being entirely truthful. What I really want in 10 years’ time is the planet to still offer me the possibility of being a pleasant lady in nice dry boots who never thought they’d own a doggy buggy.