Hungry, angry, sober and skint is not a good state to be in

Hilary Fannin: It's no wonder the second week of January is the most popular time for divorce 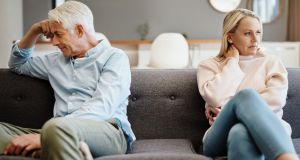 It’s not surprising that people file for divorce at this time of year Photo: istock

They say (the they-sayers) that the second week of January is the most popular time of year to file for divorce. On Monday then, expect divorce lawyers all over this rain-washed country to be falling over warring clients as they make their way to their chilly offices.

They’ll be shooing angry spouses off the linoleum-clad stairs, plucking pugilistic partners out of the cistern and running cursing couples out from under the skirting boards, such will be the plague of wannabe divorcees who just can’t take one more glum moment in their less-than-married bliss.

Apparently it’s all to do with new year resolutions and year-end reflections – which makes sense, I suppose. You spend 12 long days of Christmas grimacing through your spouse’s lousy Trump imitation, watching them pick at the turkey carcass with their stubby little saliva-stained fingers and then fall into an uneasy slumber next to them while they clear out their adenoids.

And then January rolls around, and bang, you just can’t take it any more. You lie awake through the long cold night, listening to the frost whispering in the trees, and realise you only have one life and that it happens to be going down the swanee faster than Auntie Ethel can put a hole in a bottle of A Winter’s Tale.

So far, so unfestively feasible. However, I think there are other reasons why couples flock like migrating geese to the divorce lawyers in the bleak bosom of January. I think it’s because they’re hangry.

Hangry, for those of you unfamiliar with this useful little word, is a portmanteau.

“A what?” you snap irritatedly through your organic lettuce leaf, your grated kumquat and your painfully small portion of lumpy cottage cheese. “What nonsense are you spouting now, woman?”

One definition of portmanteau, as I’m sure you know, is a word formed by combining two other words. The term breathalyser, for example, is a union of breath and analyser, while a crunk is just a regular crazy drunk (as well as, incidentally, a type of hip-hop). Our capital city, you may have noticed, is awash with crunks over the festive season – they’re the ones following you around the bar saying you remind them of their old geography teacher and asking you to correct their homework.

Yep, hangry is an amalgam of the words hungry and angry, effectively describing an explosive combination of factors, ones particularly pertinent to this post-holiday season. It’s all too easy to get hangry in Ja-hang-uary.

Hungry, angry, sober and skint is not a good state for any of us to be in when making life-altering decisions. Maybe we could make a new portmanteau to describe that dangerously impetuous new-year condition that sees marriages crumble like ageing cheese. “Hi, have you met Juno? She’s not just hangry, she’s a sobskint divorcee who can’t afford her legal fees.”

I’m not even looking up the word diet in my search engine this year. I’m reducing nothing, giving up nothing and making absolutely no promises to myself that involve lifting anything heavier than a gin.

If, however, you find yourself and your waistline being sucked into the chaos of counting calories and carbohydrates, and you’re determined to dance the self-flagellating fasting fandango, you might like to consider one of this year’s new arrivals to a heavily overcrowded market. Welcome to the Werewolf Diet, which limits how you eat based on the cycles of the moon. Basically, you fast during a full moon and don’t eat anything after 6pm during other moon phases. It’s a little bit like the rhythm method for your roly-poly bits, and we all know how successful that mathematical contraceptive conundrum turned out to be.

Apparently this diet is not backed up by research (goodness, you surprise me), and the helpful forum where I read about it suggests that the “unnecessary restrictions make it a challenge to sustain long term”. You don’t say, mate. Mind you, walking around on four legs and howling at the moon is no picnic either.

Claire Byrne: ‘My parents had to stand by the bed while I got the last rites’
6