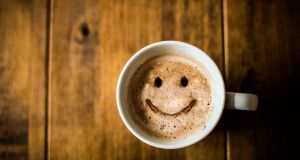 ‘For every story that leaves me feeling depressed at the state of the world, I will attempt to offset it with a story that fills me with hope.’ Photograph: istock

For a couple of years now, I have ended each year by compiling a Twitter thread of highlights from the year that was. It started in 2016. That year was written off by many as a sort of annus horribilis, thanks in no small part to the passage of Brexit and the rise of Donald Trump.

In an effort to prove that it hadn’t been a total write-off, I decided to cobble together a list of moments from the year that made my heart sing. It contained everything from a video of adorable toddlers trying to execute the mannequin challenge and failing miserably, to a photo of Irish soccer international Robbie Brady being embraced by his family after scoring a goal at Euro 2016. To my surprise, it struck a chord with my followers, and a tradition was born.

Last month, I posted the 2019 edition of the thread. Once again, it was a celebration of all things silly, heartwarming, and uplifting – three words that couldn’t otherwise be applied to 2019. There was the moment same-sex marriage became legal in Northern Ireland, or the time protesters in Lebanon serenaded a baby boy with a rendition of Baby Shark. Crucially, there wasn’t a single mention of Trump or Brexit.

This year’s thread garnered more likes and retweets than others had before. According to Twitter Analytics, the opening tweet earned over 1.1 million impressions. More striking was the volume of messages I received from people who thanked me for putting it together. Some said it had cheered them up or gotten them through an otherwise tough time. Others said it had restored their faith in humanity, and reminded them that the world wasn’t all bad.

That people need to be reminded of the fact that goodness still exists in the world speaks to the unrelentingly bleak nature of the modern-day news cycle. All day long, we are exposed to a steady stream of negative news. It is borderline impossible to turn on your phone or scroll through the internet without being bombarded with scary headlines and breaking-news alerts.

Once again, I have compiled a thread of heartwarming/funny/lovely things I enjoyed throughout 2019. The news cycle can be unrelentingly bleak but here are some bits that prove it’s not all bad.

You can start your day watching footage from yet another mass shooting, spend lunch reading about what Trump has tweeted, and end it by listening to a Punch and Judy-style debate on whether or not climate change is real. Little wonder then that you might go to bed thinking that the world has gone to hell in a handbasket.

Research has shown that consuming too much negative news can have a detrimental impact on our mental health and distort how we see the world. Yet, because of how we are programmed, we can’t help ourselves. Human brains are hard-wired to pay more attention to negative events and information than to positive news. This is known as “negativity bias”. And with more information available at our fingertips than ever before, there is more calamitous news to dwell on.

The last decade was tumultuous to say the least. It was one marked by chaos and division, fake news and gaslighting, fair-haired blowhards and constant crisis. And with Brexit, impeachment, and a presidential election on the horizon, it’s unlikely that normal service will resume in 2020.

That doesn’t mean we can’t change what news we consume, though. It is clear we are starved of good news and lap it up when it is served to us. I am not proposing that we ignore bad news in favour of only reading heartwarming stories about puppies being fitted with hearing aids. After all, it is vital that we stay informed and don’t turn a blind eye to all the injustices taking place in the world. But it is clear that we, as human beings, can only handle so much negativity before our brains get frazzled. We need a little optimism to get by.

That’s why in 2020 I am going to work to cultivate a “positivity bias”. For every news story that leaves me feeling despondent or depressed at the state of the world, I will attempt to offset it with a story that fills me with hope or makes me laugh. These stories are everywhere if you look hard enough, and mustn’t be dismissed as trifle just because they’re not discussed in the corridors of Brussels. They are as important to our understanding of the world and humanity as anything you’ll see leading a news bulletin. Think tales of underdogs defying the odds, or moving stories about the kindness of strangers. Anything that reminds us that most people are decent and kind.

In some ways, there might be little reason to be optimistic going into this decade. Nothing is going to change, right? It’s just going to the same old, same old. To that I say: we may live in dark times, but that doesn’t mean there aren’t glimmers of light to be found. You just need to open up the curtains a little and let the sunshine in.

My other top tip for challenging your negativity bias in 2020? Googling “Jurgen Klopp meets child”. I promise you won’t be disappointed.