Michael Harding: Primed for the worst, I prepare for a phone call with my doctor 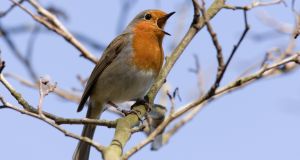 ‘It was morning when the bird surprised me and drew me away from the mundane world of doctors and medical anxieties.’ Photograph: iStock

I was sitting in my studio on the morning of the equinox, September 22nd, when a bird startled me. The sun shone through the window and I could imagine it shining into all the megalithic tombs at Loughcrew in Co Meath, as it has done for thousands of years, on that same day. The equinox always inclines me to believe that the cosmos is an constantly recurring moment.

Not that the world feels permanent or stable right now. And with rising sea levels, fires in the Amazon, droughts in California and locust plagues in Africa, it’s hard to avoid the possibility that there might be something much worse down the line. And that’s even before mentioning Covid-19.

In fact I’m so primed to expect the worst that even good weather in September felt ominous as I prepared for a phone call with my doctor.

I’m susceptible to mystical experiences at any time of the year, but the equinox is particularly auspicious

Waiting to get through to a doctor can feel like being an astronaut in a far-flung orbit waiting to link up with Earth in order to discuss something urgent with the experts.

Doctors remind me of how little I know about my own body, and though my urgencies are usually trivial mechanical matters relating to body parts, I always grow more anxious if the line remains endlessly busy. And when I get through I’m so conscious of other patients waiting their turn on other lines that I rush what I have to say and forget the key issues. Unless I write them down beforehand.

So there I was at the desk with a notebook, a sore elbow, a tingling in the left leg and a numbness in various other quarters. I was wondering if I might be deficient in vitamins, or if the tablets I take for various conditions were causing side-effects, when into that world of agitated emotions came a little bird.

I’m susceptible to mystical experiences at any time of the year, but the equinox is particularly auspicious. It marks the beginning of the long slide into winter darkness. And it’s no accident that Rosh Hashanah, the Jewish festival of new year, falls defiantly around that time, when the musical notes of the Shofar call the world to be made new again.

The Shofar is a musical instrument, a long horn used in rituals to call the faithful away from all mundane realms and into that which lies beyond and is transcendent. The music of the shofar calls us to attend to the pulse of Being itself, and which according to most wisdom traditions is made manifest in our hearts as our most intimate self.

I heard no shofar, and am a long way from any synagogue, but for me the bird was as good as a high priest singing his mellow notes.

Perhaps the good weather confused him, or maybe he sings to himself for the same reason as I play the tin-whistle in solitude; it gets me through dark winters. Or perhaps there was no reason for his spontaneous joy, pouring itself into the world and opening for me a layer of optimism that cannot be described in words.

In a poem as brief as it is exquisite, Patrick Kavanagh once addressed a blackbird with the following sentence.

“Oh Pagan Poet, you and I are one in this; we lose our god at the set of sun.”

It was morning when the bird surprised me and drew me away from the mundane world of doctors and medical anxieties, but that tiny little creature, on the branch of an apple tree startled me no less that Kavanagh’s blackbird.

And I could understand why Kavanagh addressed him as a pagan poet, because I too realise with increasing clarity that the natural world is a sacrament beyond anything that the liturgies of religious traditions are capable of expressing.

In the birdsong I could imagine the true heart of the universe emptying itself, and uttering itself in the quiet morning air. And I was astonished that one solitary bird in the garden had the power to lure me away from all my worries.

I guessed it might be a robin and when I put my head out the door I was proved correct. There he was, his perfectly round eye engaging mine.

I bade him welcome. Because I know that if things get darker in the next few months, with extreme weather or flu epidemics, or further surges of coronavirus, or even in moments of personal depression, his presence outside my window will be for me an enormous comfort and reassurance.