When singer Jess Kavanagh discovered polyamory, she didn’t expect it to improve every facet of her life 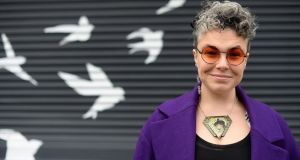 Singer Jess Kavanagh: ‘Having multiple romantic partners has forced me to investigate elements of my emotional coping mechanisms that were unsustainable and hidden among the nooks and crannies of monogamous comforts.’ Photograph: Dara Mac Dónaill

My relationship with my partner has come a long way from me sobbing into a gin and tonic two years ago, clumsily asking for an open relationship. At that point, I had a very little idea of what I was asking for or what I was getting myself into.

My lack of emotional grace and inability to ask for specific needs convinced my partner that after five years I was asking for a way out of our relationship.

Who in their right mind would consider non-monogamy as an appropriate avenue to evolve any relationship? Surprisingly (for some) in July we celebrated our seven-year anniversary and as well as an evolution for our relationship, it has been a considerable personal journey.

Currently 4 per cent of Americans, nearly 16 million people, are practising a non-monogamous style of relationship

Although I am still extremely new to these experiences of sharing my partner and dating in a scene which is overwhelmingly catering to monogamy, some lessons I have learned from my dating journey have been very unexpected.

Jessica Fern, psychologist and author of Polysecure: Attachment, Trauma and Consensual Nonmonogamy, describes consensual non-monogamy as “the practice of having multiple sexual and/or romantic partners at the same time, where all people involved are aware of this relationship arrangement and consent to it” and polyamory as a “part of consensual monogamy . . . looking for multiple people to be in love with”.

On a Saturday afternoon I sat down for a discussion with Fern about how polyamory is becoming not only a realistic relationship choice, but also a distinct way for us to employ emotional work and express a collective love at a time where there is a global lack.

Ferns says that currently 4 per cent of Americans, nearly 16 million people, are practising a non-monogamous style of relationship. Although attempting to find the equivalent statistics for Ireland or the EU proves difficult, anecdotally, I have found many peers to be highly intrigued by the concept and a small number to be practising either polyamory or varying modes of consensual non-monogamy.

On the other side, there has been the reaction of friends grimacing and shifting nervously, exclaiming “it’s not for me” as if I’m trying to recruit them into a sex-commune.

As I began to date other people, I started to experience my first bumps in the road

Sex-communes aside, having multiple romantic partners has forced me to investigate elements of my emotional coping mechanisms that were unsustainable and hidden among the nooks and crannies of monogamous comforts. There is a narrative held dear in our society that once we are our loved one’s only sexual and romantic partner, that allows us to feel secure in that relationship.

Fern says: “In such cases, our self-esteem and sense of worth are contingent on our partner being monogamously committed to us instead of anchored in our own internal sense of self-worth, self-love and self-esteem.” In polyamory, when that narrative isn’t available as relationship-scaffolding, it is crucial to find other ways to make our partner(s) feel special and to re-establish a sense of inner-security. The freedom and innovation in these explorations can be transformative.

As I began to date other people, I started to experience my first bumps in the road. I was developing big crushes and chasing those butterflies to my detriment. In polyamory terms, this high is called NRE or “new relationship energy”. I was overextending myself to keep certain people interested.

When this happened, I noticed how other romantic relationships began to suffer. It became clear that I wasn’t just self-sabotaging for the sake of fleeting validation (a hobby easily maintained in singlehood), but also straining my other relationships, which needed nurture and care.

It was crucial for me to manage my insecurities and I started to take my emotional health very seriously. I started meditating more, researching attachment theory, trauma, and seeking therapy. Although all rejections and break-ups warrant varying levels of processing, the emotional maintenance I was doing reduced wallowing and self-destructive behaviour across all aspects of my life. A byproduct of polyamory I never expected.

Polyamory has given me the ability to see the nuance of romance, and moments of platonic intimacy with friends as much as with partners

The romantic relationships I have nurtured have different levels of commitment and in some ways bear similarities to “hook-up” culture. Functioning within the hierarchical polyamorous framework, I have my “primary partner” who I live with, and I have secondary partners who inhabit my life in beautiful and enriching ways. While organising dates and getting to know different people, communication and transparency are always paramount. When feelings of insecurity or jealousy arise it is encouraged to talk it out, either with new or established partners.

In the past, I found single, monogamous culture internalising what Fern calls a “hyper-independence”: a lack of accountability to casual partners emotions, a type of frenzied everyone out for themselves behaviour. This always made me feel uncomfortable, having to extract love from sex if the outcome wasn’t monogamy. Almost as if sexual intimacy and friendship isn’t a loving relationship to nurture and cherish without an end-goal of exclusivity.

Then there is friendship. Polyamory has given me the ability to see the nuance of romance, and moments of platonic intimacy with friends as much as with partners. I have found myself waking up energised and loved-up from a night out with pals in the way I would feel after a good date. I have more friend crushes. The boundaries of connection have not blurred, but shifted, where I can feel varied shades of love along the spectrum of the romantic to the platonic.

I tell my friends I love them more. I want them to know they are cherished, the same way I want romantic partners in my life to know that they’re important and that having more than one connection does not depreciate their value.

The foundation of polyamory is based on the concept that love is not a finite resource. We are living in a time rife with isolation, distrust and ideological conflict. Although you may read this with intrigue or be the one shifting awkwardly internally screaming “not for me!”, there is something we all can take from an orientation that embraces the imperfect, heralds respectful communication and acknowledges the many embodiments of love.

Fern says: “Non-monogamy can offer a bigger sense of love that we all need, [it] breaks down the nuclear-ness, the Us vs Them mentality and provides bridges of love to different people.”

All I can do is keep building bridges.

Polysecure: Attachment, Trauma and Consensual Nonmonogamy is published by Thorntree Press in October