Michael Harding: Then I saw her. Taller and blonder than I remembered 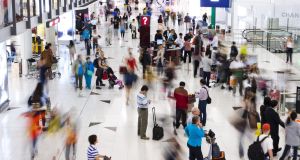 ‘I almost fell over the five cases on her trolley.’

I was in the foyer of a Dublin hotel one night talking to the General about his prostate.

“A touch of cancer,” he whispered, “so I think my urologist is going to whip it out”.

My couch was so far from his couch that we would have needed phones in order to communicate confidentially. And he was very explicit about his anxieties regarding surgery.

“The ex-wife tells me that men don’t need erections to be loving human beings,” he said, wincing at the thought.

“But I suppose that’s what comes from doing too many courses in psychotherapy. When we divorced I told her she would be better off taking up Bridge, but nothing would do her except go back to college; now she’s an authority on everything psychological.”

Later that night I was still thinking about his prostate as I lay awake in bed, so I opened the minibar, found it empty, and then put on my clothes and went back down to reception where I ordered a night cap.

The barman graciously arrived from the bar swinging his hips and balancing a big fat brandy glass on a tray.

“I’ll carry that to my room,” I said, taking the tray.

I was wearing black trousers and a waistcoat and a woman on the fourth floor happened to open her door as I passed, and thought I was a waiter wandering in the night.

“Perhaps you could bring me a brandy as well,” she said, “when you’re ready.”

“Well I’m ready now,” I declared, “and I’d be only too happy to give you half my Hennessy; although you might prefer to call room service.”

She apologised for her mistake, and I carried on to my own room where Donald Trump was ranting on CNN; a man who could easily be mistaken for the General.

In fact I’m amazed how often a mistaken identity gets me into trouble. For example the following day I picked up my daughter at the airport and I was so excited about her returning from Australia that I couldn’t see straight.

But then I realised it wasn’t her. So I retreated before I had made physical contact

I stood like a meerkat on my hind legs in the Arrivals hall as a steady drift of young people emerged through the automatic doors, pushing trollies of suitcases, or lugging rucksacks, with water bottles in their pockets, or babies on their backs; young women as fresh as daisies and men with jackeroo hats and red faces looking like they had been on an all-night binge.

Then I saw her. At least I thought I saw her. She seemed taller and her hair was closer to blonde than I remembered. But it was her. And I couldn’t restrain myself from rushing forward.

I almost fell over the five cases on her trolley; which seemed a lot, especially the one that looked like a trumpet case, because my daughter didn’t play the trumpet before she left.

But then I realised it wasn’t her. So I retreated before I had made physical contact.

“I thought you were my daughter,” I said apologetically.

The young woman was indignant. “No,” she sneered, in a German accent, “I am not your daughter.”

As if I was an entire gobshite for having thought she might be; and I felt a kind of shame that stayed with me all day.

That evening I met Sean Keane in Carrick-on-Shannon. He was doing a gig in the Landmark Hotel. We had a quick coffee at the bar, and his enthusiasm for life cheered me up.

He told me about a bee in Brazil that can make a musical note by vibrating its wings.

“I heard it from David Attenborough,” he said. “The wings vibrate in D.”

But apparently there is a certain flower that is reluctant to open. So when this particular bee hovers above this particular flower, the bee changes his note from D to C. Then the flower opens. The bee drops the pollen. And the universe continues to unfold.

“The flower likes music,” I declared, with astonishment.

“Everything is interrelated,” Keane explained. “The bee and the flower, just like the ocean and the shoreline, the water diviner and the well. The entire universe is talking to itself.”

And I agreed with him because he’s a musician who is blessed with both poetry and wisdom, and although his songs are always sad, his faith in the universe is intoxicating.

Even though sometimes I feel like a bee that is too old to fly, never mind to make music with its wings.

First Look: Dig In, the Maser-curated ‘art diner’ that’s about to open in Dublin
7