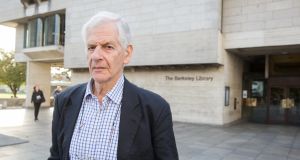 The library, which was completed in 1967, is deemed by many architects to be Ireland’s finest modernist building. It was built following the Brutalist style of bare concrete architecture popularised by Le Corbusier.

The Austrian born architect was just 28 when he won the international competition in 1961 for a new library building without having set foot in Dublin. Trinity College was seeking a building that spoke to the 20th century as strongly as the adjacent buildings – the Old Library and the Museum Building – did to the 18th and 19th centuries.

Setting back the building from the Old Library and the Museum Building allowed the design to incorporate a large podium which offered unique views of Trinity’s historic squares and a labyrinthine subterranean level with secret connections to other buildings. Koralek came to Dublin to oversee the mixing of the concrete on site for the new library by the Crampton family firm of builders. His innovative use of concrete poured into wooden moulds gave the impression of wood grain on the surface of concrete slabs.

The Berkeley Library, which led to the employment of more than 50 new staff at Trinity College, opened up the library collections to more readers by doubling the reading space and increasing the storage of books. Officially opened in 1967 by president Eamon De Valera, it joined other renowned modernist buildings – Busáras and Liberty Hall – in Dublin city centre.

Helen Shenton, college librarian and archivist says that when built, the Berkeley Library transformed library services for students and readers. “It was a modern library, not just for Trinity but for Ireland. Paul Koralek’s architectural vision for this modernist building played a critical role in making this possible. Generations of students and Irish people have benefitted from its vast collections.”

On the completion of the Berkeley Library, Koralek was then appointed principal architect for the new Arts Building in Trinity College in 1969 which was formally opened in 1978. In the 1990s, he was also commissioned to design the new dental hospital and school on Lincoln Place.

The only child of Ernst and Alice Koralek, Paul was born in Vienna but left Austria at the age of five when his family moved to Britain following the annexation of Austria into Nazi Germany in March, 1938. Following his education at Aldenham School and a year studying French language and culture at the Sorbonne, Koralek studied architecture at the Architectural Association School of Architecture in London from 1951-1956. His cosmopolitan background and experience fitted well with the atmosphere of what was then the UK’s most innovative architectural school. After his graduation, he worked for Philip Powell, designing nurses’ houses at a hospital in Swindon. However, before they were finished, Koralek grabbed the opportunity to work for the great Modernist architect, Marcel Breuer in New York.

He met his South-African born wife, Jenny Chadwick at a New Year’s Eve party in London. The couple lived in Paris, Canada and New York before returning to England. Their first child, Katy was born in New York. Their daughter, Lucy and son, Ben were born when they returned to live in Camden. All three children took on their father’s passion for architecture and the arts, choosing careers in education, drama and stage design. As a family, they also enjoyed many holidays travelling throughout Ireland. Jenny Koralek, who went on to become a well known children’s author, died in 2017.

Koralek returned to Trinity to give a public talk in October, 2017, on the 50th anniversary celebrations for the Berkeley Library. More than 500 people came to hear him speak about how he did the drawings in his spare time while working for Breuer in New York. “Blown away” by the news that he won the international competition with 350 entries, the Berkeley Library project then became the first major project of the fledging London-based architecture practice, Ahrends, Burton and Koralek (ABK) that he set up with his former classmates, Peter Ahrends and Richard Burton. ABK architects also established a Dublin office in 1996.

In conversation with Irish architect John Tuomey at that event in Trinity College in 2017, Koralek said that the Berkeley Library job was the “beginning of an intense and lifelong collaboration between the three architects which started as friendship and remained so through all the vicissitudes of life”. The architects also made firm friends with staff at Trinity College and helped choose some of the striking sculptures that remain on campus to this day.

As a designer, Koralek relished challenges of integrating contemporary buildings into historic settings. He also liked achieving powerful and dramatic architectural effects while understanding the underlying needs of the users of the buildings. However, not all of ABK’s projects were appreciated at first. Their prize-winning Hampton extension to the National Gallery in London was initially described by Prince Charles as “a monstrous carbuncle on the face of a much loved and elegant friend”.

Other projects by ABK architects include St Andrew’s College, Booterstown, Dublin, the the County Hall in Tullamore, Co Offaly, Templeton College, Oxford, the John Lewis department store in Kingston-upon-Thames and the British embassy in Moscow. Paul Koralek was elected to the Royal Academy of Arts in London in 1991 and later became a senior academician in 2008.

He is survived by his daughters, Katy Ricks and Lucy Linderoth and grandchildren Jenna, Lilly and Jake. His son, Ben predeceased him in 2006 and his wife, Jenny died in 2017.