Michael Harding: ‘I could hear my boots under the bed, crying all night’

Their leaky soles were no match for a Warsaw winter but in the end I couldn’t abandon them . . . even for swanky Italians 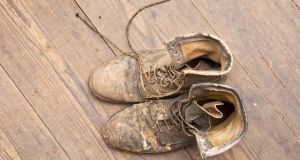 These boots were made for crying... Photograph: iStock

When I’m alone for long periods I have conversations with inanimate objects, just like Tom Hanks in the film Cast Away. I’ve never spoken to a volleyball but I do talk to my coat, my hat, and even my boots, when I’m isolated for more than a week.

I was alone in an apartment in Warsaw since Christmas; after four weeks I noticed that the soles of my boots were worn away and falling off like dead skin.

“You boys are finished,” I said.

And the boots replied: “Don’t say that; we’ve been good to you for years; we carried you everywhere.”

“But you can’t get me through the puddles anymore,” says I, “so it’s over.”

I could hear the shoes under the bed crying all night.

They were still sad the following day, as I tied the laces and headed out in a shower of rain.

I searched for a shoe shop, but it was Sunday, and the shops were closed, apart from fast-food outlets in the shopping mall, where old men were loitering over bowls of soup. A destitute woman hung around the toilet area looking for a warm corner to pass the time, her eyes lowered in shame as I passed.

After lunch I strolled across town to the train station where a departures board was signalling that a train to Lodz was leaving shortly.

“Now there’s a place where I could find boots,” I thought, and I walked up to a glass kiosk and bought a return ticket, as the boots on my feet continued to weep.

“Where are we going?” they screamed as I descended the escalator to platform 3. But I didn’t reply.

The first time I visited Lodz it was hidden beneath frozen snow; icicles hung from the gutters of majestic buildings and workers on cherry pickers tried to hammer them off so they didn’t fall accidentally and knock the heads off pedestrians.

In fact, snow was what first drew me to Poland; I may have been a bird in a former life and some pathway to snow remained in my DNA as a human. I love snow.

Now Poland has modernised. The train to Lodz is an exquisite experience of comfort, silence, good wifi, blue carpets and soft seating; but like everywhere else in Europe, there is much less snow.

The new train station in Lodz is a vast canopy of glass and steel girders, housing empty spaces, escalators to and from the lonely platforms, and small coffee stations like islands of repose in the main hall.

I walked to the Savoy Hotel, a remnant of 1950s Europe, elegant and frozen in its mid-20th-century grandeur; rooms replete with old radio sets and heavy curtains. An elderly porter escorted me to the fifth floor in an old rickety lift.

That night in a Bulgarian restaurant nearby, I dined on stew served in an enormous skillet bowl, accompanied by a dish of marinated red peppers which, when combined with multiple shots of vodka, left me feeling like I might be Bulgarian.

I was so energised that I took a dander down Piotrkowska Street afterwards, a fine long avenue of magical winter lights, in the hope of finding a sociable bar.

And I did, except that everyone looked like they had just turned 18 yesterday, and I felt so old that I decided to flee back to the hotel where the porter was still stationed in the old lift. On our slow ascent to the fifth floor he spoke of his outrage that Scotland had been snatched from the European Union, against the will of the people.

“Now, they are stuck in the English Union,” he said with indignation. I was glad to be Irish because the lift was tiny.

I nursed a hangover the following day until lunchtime, but in the afternoon I found the boot – Italian hiking boots that covered my feet like velvet gloves.

However, before I could come to a final decision about purchasing them, the saleswoman suddenly put on her black puffer coat, zipped it up and announced that the shop was closing. I pleaded with her, but she said she had closed the till.

All I could do was put the swanky Italian boots back in the box.

But my old boots were delighted.

“I’m sorry for trying to abandon you,” I confessed at last. “Maybe I’ll get a cobbler in Leitrim to fix the soles.”

And that night, as I gazed at them on the carpet of the hotel room, tattered and broken, they seemed as lovely as a violin sonata.